You come in early to start prep. Pray you catch the staff meal and a bite during your break—if you’re lucky enough, that is, to have one longer than a few cigarettes during your stressful 12-hour shift.

Wrap up at a time when your only options are crushing fast food and a sixer. Exercise and diet? Forget about it.
As much as “healthy” trends have dominated the food world of late, the fact remains that most hospitality workers struggle to practice what they preach.

“When you think about it, we’re in professions where we’re taking care of (other) people, and we never take care of ourselves,” says Chef-owner Steve McHugh of Cured  in San Antonio.

Passion and adrenaline can sustain a person for a while, but human nature is fallible—particularly in an environment as taxing as the restaurant industry. From job-related stressors, such as anxiety, depression and obesity, to genetic predispositions, like inflammatory bowel disease, Celiac disease and cancer, making health-focused lifestyle changes has become more than a mere fad for chefs and restaurant workers. Change is possible, but it isn’t easy. Yet these chefs say it’s worth it, as rethinking the way they cooked and ate transformed—and saved—their lives.

Kicking cancer in the butt In 2009, McHugh started noticing a change in his body. It began with treating bouts of dermatitis with steroids and creams—and getting called out by his dermatologist for his lifestyle and eating habits for the first time.

“You start to realize, ‘if I eat a beet salad instead of crushing a box of French fries it’s going to do good things for my body,’” McHugh says. “It’s going to bring down the redness in my skin and the things that are hurting my body.”

Understanding the need to change the way he ate became a lifesaving decision when he was diagnosed with blood cancer a year later. Enduring a year of treatment that included eight excruciating rounds of chemotherapy while he tried to keep weight on and stay healthy, McHugh began researching and using food to heal himself.

At home and at the restaurant, he became even more aggressive in his commitment to buying local and supporting sustainability.

“When you’re going through treatment, you’re not allowed to eat fresh fruit except maybe a banana, so you start to miss things that you took for granted. You miss an apple or a nice salad because you don’t know if the restaurant you’re in is washing the lettuce,” McHugh says.

“After you get sick, you think about the way you cook; you kind of fine-tune things a little bit. So now I’m in the process of visiting every farm, every farmer, to understand their practices ... (and) understand what they’re eating, understand how they’re being raised as a part of our own health. It’s a challenge, but it’s one that I believe our customers wholeheartedly believe in.”

At his restaurant, McHugh always serves up some variation of a pumpkin pepper salad, which underscores just how much strategic sourcing can bolster the health benefits of a dish.

The pumpkin in McHugh’s salad delivers fiber, antioxidants and calcium, which can help protect against cancer. Then by swapping in locally grown hard squash in the fall, he adds an extra punch of beta carotene, known for fighting free radicals. Studded with anti-inflammatory ingredients like pecans, black pepper, mustard seed and celery, the salad becomes a targeted roundhouse aimed at combating inflammation, which can exacerbate health problems, such as asthma, diabetes and heart disease.

Chef Jeffrey Stoneberger never ate during the non-stop 15-hour shifts at the Michelin restaurants he worked at five years ago, but he did taste. A lot.

Rich purees thickened with ungodly amounts of butter, sugary root vegetables and heavy concentrates were constantly being whipped up and tested. Working in a stressful environment, he didn’t notice he was slowly ruining his gut until he stepped away from the line.

“I’d come home late at night and crush calories that I had been lacking throughout the day,” he says. “You don’t get to burn those carbohydrates. They sit and ferment and cause gut rot, fermenting foods inside your system. So not only did I realize I needed to change what I ate, but how I ate.”

As his body started to catch up with him, Stoneberger started exchanging verbiage about Irritable Bowel Syndrome, Inflammatory Bowel Disease and Crohn’s Disease over social media with fellow chef Ryan Santos of Please Cincinnati in Cincinnati.

“When you go to a gastroenterologist, it’s not like going to a surgeon where they’re like, ‘We need to operate on your arm because it’s broken,’” Stoneberger says. “They give you such a barrage of tests. It’s all trial and error. I went through all of that, and no one had ever really experienced any of that stuff. So talking with Ryan, who is a chef doing things outside the norms, was really important.”

Stoneberger began incorporating Japanese fermented foods into his diet, which immediately and radically transformed his body. He learned to make his own misozuke (rice bran fermented Japanese pickles), which have natural microbial benefits for digestion, and became the foundation for his ramen pop-up concept, 2Nixons in Charleston, South Carolina. Whether customers are aware or not, Stoneberger’s menu is health food he can swear by.

“People generally look at foods related to the word ‘diet,’ and it has a negative connotation,” he says. “People assume diet means restrictive and bad things. I wanted to eat differently because I wanted to feel better. ”

Diners can leave satisfied and nourished by mimicking the way Stoneberger feeds himself. When he’s not using his own lacto-fermented ingredients made in-house, he’ll reach for vetted products from his pals at San Francisco’s Cultured Pickle. Their naturally fermented dulse sauerkraut brightens dishes like his take on the Japanese pancake okonomiyaki and sour shio ramen, which come with the added bonus of vitamins C and K, and probiotics that regulate intestinal functions. 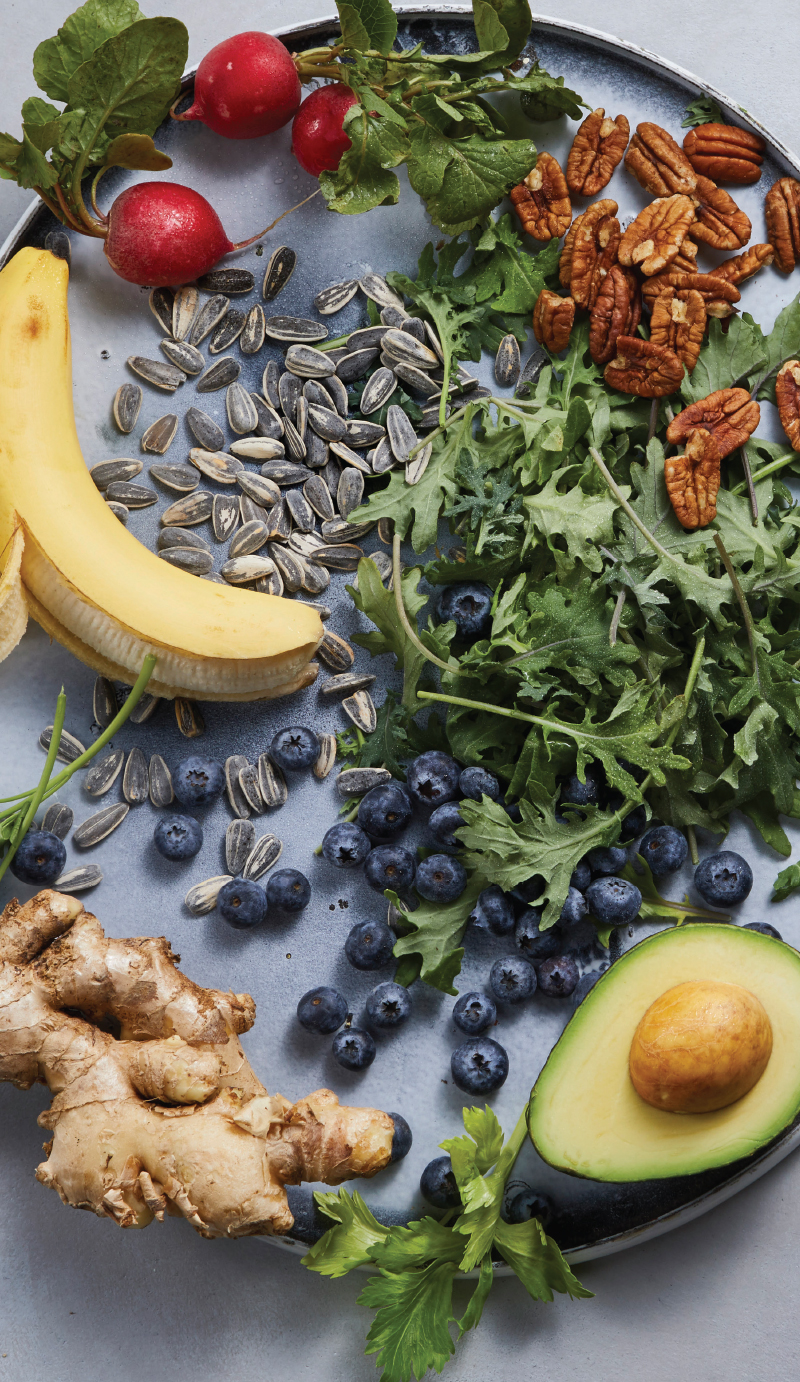 In theory, a staff meal is the hallmark of hospitality—the time when you take care of your crew. The reality is more of a “kitchen sink” meal featuring trimmings and cheap, filling carbs to keep food costs in check. So if you’re a chef touting the benefits of a healthy lifestyle, how do you pass that philosophy onto your staff?

At Cured, McHugh tells his sous chefs to make salads. “We have to have a salad every day because I’m going to eat it. I might only eat that,” he says. “Back in the day, you’d never have salad. It was shepherd’s pie or some fish guts fried up. So I always say, ‘Have a healthy side. It can be fried chicken for staff meal, but let’s have something healthy to go with it.’”

McHugh takes this practice one step further, recognizing the economic realities his staff face might limit their ability to eat healthy off-hours. Which is why he allows his employees to eat the staff meal even on days they’re off. Some, he says, don’t eat when they’re not working.

“If you’re struggling in life, and you only have a certain amount of money to spend, are you going to spend it on vegetables or fruit? Probably not. You can stretch your money on starches. These people work for me, so there’s a greater motive.”

Staff meals are crucial to maintaining camaraderie and innovation at 2Nixons, Stoneberger says. Hours often stretch longer there than at a brick-and-mortar restaurant. Prepping at a commissary space as well as picking everything up and packing it all up at the end of service takes time, which makes a staff meal an opportune time to not only feed staff but also experiment.

Leftover pea pods, for example, are juiced by one of his sous chefs and added to ramen broth with raw vegetables for the family meal. If it’s a unanimous hit with fellow cooks, then it’s worthy enough to serve to customers and suddenly the staff meal has just paid for itself.

“Family meal is usually part of the creative process,” he says. “I believe that everybody is part of the team, and people have a lot to convey and contribute to various cooking scenarios. That’s how some of the coolest concepts come about in the restaurant.”

What chefs do when health is on the line:

Why change? Unhealthily snacked at work, but promoted and supported healthy eating habits at home for his kids. “Why wasn’t I doing it every day at work and in my own life as well?”
What was done: Kicked refined sugars, processed foods, dairy, grains and legumes to the curb, and watched his salt intake. Added more veggie and Paleo-friendly items to The Wayfarer menu. Reduced fat, carbohydrates and sugar on many menu items, making it easier for guests to realize healthier items were available.
The net net: Noticed a change in energy almost immediately, which fueled willpower. Believes it’s easier to reduce or be conscious of overindulgence than sticking to a particular diet.

CHEF DAVID NICHOLS OF RIDER IN SEATTLE
Why change? Stepped on a scale, saw weight at 250 pounds and realized that “the life of a young, carefree eat-what-and-when-I-want had caught up to me.”
What was done: Exercises and refrains from eating after 9 p.m. Eats three meals a day that are healthy, smaller portioned and full of vegetables.
The net net: Dropped down to 170 pounds in six months and has stayed true to eating and cooking a very vegetable-driven menu at home and at the restaurant.

CHEF TRACY CHANG OF PAGU RESTAURANT IN CAMBRIDGE, MASSACHUSETTS
Why change? Noticed a diet of “a lot of coffee, dinner and/or drinks meetings” while working on her restaurant and during the construction.
What was done: Added a morning power smoothie and more exercise, such as yoga, playing soccer with high school friends and walking to the park with her pug.
The net net: Looks and feels better but is also happier having slightly more “me time” even though she’s still very busy.