WE’RE TALKING SHOP ON HOW TO DRIVE TRAFFIC!

In order to succeed, having a steady stream of customers is a non-negotiable. And in today’s digital world, that means making sure your online presence drives customers through your doors. At this event, we’re discussing what information and tools you need to be competitive and drive diners from the web into your restaurant.

Angela M. Salamanca
Angela M. Salamanca was born and raised in Bogotá, Colombia, before moving to the U.S. at the age of 17, to pursue a degree in art and art history at the University of North Carolina at Chapel Hill. 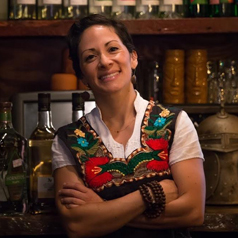 For over ten years, Angela worked in the restaurant industry with her uncle – the founder of the popular Dos Taquitos Mexican Restaurant in North Raleigh, North Carolina. After years of studying and falling in love with Mexican cuisine, Angela partnered with her uncle to open Centro in 2007, in downtown Raleigh.

In 2015, Angela opened her second venture, Gallo Pelón Mezcaleria, North Carolina's first and only mezcal bar. Over the years, Centro and Gallo Pelón have received countless accolades, which have helped the restaurants cultivate a loyal guest base and create opportunities for new ventures on the horizon.

Due to her love for Mexican food and culture, Angela organizes a yearly street festival and 5k Fun Run centered around the Day of the Dead. She has partnered with the Brentwood Boys & Girls Club and has raised hundreds of dollars for the organization while creating awareness of the Dia de los Muertos holiday.

Angela currently lives in Raleigh with her two daughters.

Damion R. Moore
Damion Moore started his career working as a software product manager at an international telecommunications company. Five years later, he realized that his heart was in the food and restaurant industry and made the decision to pursue his culinary passion full time.

In 2000, Damion began cooking professionally and launched a small catering business, Blue Mountain Catering. After nearly a decade in the catering business, Damion wanted to transition from a catering business to a full-service restaurant. After exploring several concepts and partnering with college friend, Randy Wadsworth, Damion opened a brand new restaurant, and in early 2010, Dame’s Almost World Famous Chicken & Waffles was born in downtown Durham.

Today, the Harlem Renaissance-inspired restaurant is known for its comfort food combinations and tribute to jazz in the form of music and art.

Sera Cuni
Born in Trumbull, Connecticut, Sera Cuni grew up in a family of self-taught cooks who enthusiastically embraced their Italian and Czech heritages. Filled with kitchen memories, her childhood consisted of draping handmade pastas rolled out by her grandparents’ expert hands over the backs of dining room chairs, stirring pots of garlicky tomato sauce until simmered to perfection, and creaming butter and cottage cheese for flaky kolacky cookies at Christmastime. For the Cuni family, such traditions, including sharing home-cooked meals together every evening, were the necessary ingredients for an abundant life. 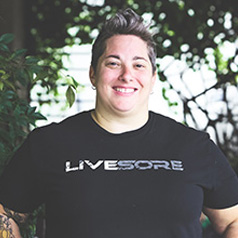 The bonding experiences also helped pave the way for Sera’s career. Although a talented athlete who excelled at soccer, Sera’s interest took a significant swing thanks to Saturday mornings with her father, who first introduced her to Julia Child and her cooking shows on PBS. After attending Green Mountain College in Vermont on a soccer scholarship, Sera took her passion for food and cooking back to Connecticut, where she graduated from culinary school. Over the course of her career, Sera has worked as a chef at Main and Hopewell, Americus on the Wharf, and Pastis, all in Connecticut; at the Fearrington House Inn in Chapel Hill, North Carolina, and Nordstrom’s Café in Durham, North Carolina; In 2006, cookbook author and chef Sara Foster hired her as a chef and kitchen manager for the Foster’s Market Chapel Hill restaurant, where she was promoted to general manager in 2008. In 2013, Sera and her wife Susan purchased the Chapel Hill location and rebranded the restaurant to The Root Cellar Café & Catering in 2014. A second location of The Root Cellar opened in Pittsboro, North Carolina in December 2017. Sera still considers Chef Foster as a mentor, and as such abides by her primary food ethic—that great food doesn’t have to be fancy.