Restaurant operators have long struggled with rectifying the imbalance of traditional gratuity policies.

Is it fair for cooks to continue to earn a fraction of what servers do? Are tips still the best way to incentivize good service? Can new systems potentially improve staff benefits to maintain loyalty?

The timing wasn’t completely unexpected. Implementation of the Affordable Care Act and a wave of recent minimum-wage hikes have compelled many operators to question the long-term viability of the current system.

As a result, an increasing number of restaurateurs are looking to alternative service-payment models. Some of these new systems offset the loss of revenue from tips with higher menu prices; others levy administrative fees and inventive profit-sharing programs.

“How many restaurants will succeed with these models is uncertain,” says Steve Zagor, dean of business management programs at the Institute of Culinary Education. “But at this point, it appears to be a movement to be reckoned with.”

Tipping is an illusion of control for guests and servers, says Anthony Rudolf, former director of operations at Per Se who founded Journee, a New York-based educational organization for restaurant professionals. “The whole system is a charade. The only person with control is the owner, to hold their team accountable to the level of service they desire.”

Leaving 18% is a sign of approval for some diners who typically leave just 15%. Meanwhile, those who usually tip 20% may leave an 18% gratuity to indicate mild disappointment. Trying to figure out what guests are trying to communicate through their tips is pure guesswork, says Rudolf.

As a result, Per Se devised a service-included model, which raised the overall price of its set menu offerings. According to Rudolf, this model gives operators greater control over their purse strings. The system means Per Se can provide cooks with higher hourly wages, and increase salaries for their best servers and managers – thus reducing restaurant staff turnover.

“I know most restaurateurs are fearful of change,” says Rudolf, “but implementing the right change can improve the entire ecosystem of your business.”

At the Basque-inspired Huertas in New York, managing partner Nate Adler took a similar approach in late 2015, dropping tips altogether while raising prices on individual items across his menu. The key, he says, is to carefully calibrate menu prices without turning off diners. Popular items, like his grilled octopus, might be bumped up $5, while others may go up only $1 or $2.

The goal is to bring in an additional 22.5% in revenue. A portion of the revenue is divided between the front-and back-of-house staff like a tip jar, sidestepping any laws prohibiting servers’ tips from being distributed to noncustomer-facing employees.

“The great thing about this system is that we can vet people who come looking for a job,” says Adler. “We can say, ‘Here’s what we do. Do you want to be a part of that?’ We can build a team who’s invested in the restaurant itself.”

As a result, Huertas has had less difficulty filling vacant positions, and can ensure its servers are covered with better wages during slower patches of the year.

Finding a Model That Works

For some restaurants, increasing prices to eliminate tips can rub customers the wrong way. Joe’s Crab Shack ended its no-tipping pilot at 14 locations, after determining that the change caused a drop in sales and complaints from staff. While some operators see the lack of adoption at a national chain as a setback, others believe success lies in implementing the right model. Many concepts in Renee Erickson’s Seattle restaurant group Sea Creatures, for example, are located in mixed-use spaces that include dining rooms using the old model. Raising prices means servers would have to continually justify the uptick in relation to establishments only a few steps away.

Knowing that many of their guests have dined abroad, Operations Manager Jeremy Price instituted a set 20% service charge on every check, like the model used in Asia and Europe. Transparency is key, with each menu indicating how the charge is divvied up: 55% to servers, 20% to the back of the house, and the remaining 25% going to the company to pay for benefits.

“I think employees gravitate to restaurants where they feel like they are getting a fair shake,” says Price.

Eliminating tips is only one way to boost staff earnings and loyalty. After ditching gratuities in favor of set hourly wages, co-owners Joshua Lewin and Katrina Jazayeri at Juliet in Somerville, Massachusetts, instituted a quarterly profit-sharing program. The program was designed to help their employees feel like active stakeholders in the company, providing staff with full profit-and-loss information each month, as well as training on how to read the statements.

Lewin and Jazayeri set basic benchmarks for the health of the company, taking into account wages, rent, savings for improvements and an emergency fund. Any profits that are accrued above that number are then split 50-50 with the staff on a monthly basis. The goal is for everyone in the company to earn $2 an hour above their given hourly salary, but it also seeks to incentivize staffers to reduce waste and to upsell the right items.

“In the end, I just don’t want others to struggle the way I did,” says Lewin. “I’m lucky to have built a career in this industry. I hope a system like ours takes some of that need for luck out of the equation.”

If ending tipping is so easy, why isn’t everyone doing it? Countless restaurant operators are holding fast to the old model to avoid difficult management decisions and costs, says Zagor.

Under the traditional system, servers’ salaries are dictated by paying guests. A shift to a no-tipping system not only creates an extra tax burden, but it also forces restaurant operators to set individual wages – perhaps paying one server more than another, which can cause friction. Restaurateurs are torn over the inevitable backlash from servers who will feel that they aren’t making as much and customers skeptical of paying higher prices.

“As it is right now, diners control whether or not a server can pay their bills, rent and even eat,” says Robert Phalen, owner of One Eared Stag in Atlanta. “By rolling everything into the final bill, we, as industry leaders, can ensure that our staff is taken care of.”

The traditional model has other benefits, such as immediate feedback and incentives to provide better service, says Eric Silverstein, chef-owner of the The Peached Tortilla in Austin, Texas.

“Servers and bartenders are incentivized to give out better service,” Silverstein says. “Additionally, people tip differently, dependent on the situation – for instance, takeout versus dine in. A (set) fee model eliminates situational tipping.”

Chef-owner Fabio Viviani, who operates a number of restaurants in Illinois and California, believes that the traditional model remains the best way to differentiate stellar workers from subpar ones, as well as dedicated career employees. He questions if servers and staff members will show the same enthusiasm and drive under a new system. 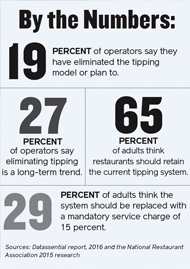 Take a tip from these unique service payment models.

Ippuku in Berkeley, California, has imported a restaurant payment model often used in Japan that adds the cost of sales tax to its menu prices and a $3 per person “table charge” to all bills.

Guests who visit Magpie Cafe in Sacramento, California, are presented with a check bearing two different tip lines: one labeled “server tip” and another labeled “kitchen tip,” which allows for gratuities to be divided as diners see fit.

Seattle-based seafood chain Ivar’s has raised menu prices, but retains an additional tip line. Therefore, everyone makes at least $15 an hour, but servers can still earn gratuities for excellent service.

Willow Restaurant in Portland, Oregon, has eliminated tips and implemented a “single house system” where all employees act as servers and chefs, preparing and delivering dishes to guests.

Bar Marco in Pittsburgh has nixed gratuities and established set salaries for all employees by reducing portion size, using more whole-animal butchery and cutting down on excess labor.