If nothing good ever happens after midnight, then how do you explain the enduring success of New York’s Blue Ribbon Brasserie? Morning after early morning, it draws legions of sleepless off-duty chefs, musicians, tourists and Broadway actors for its full fine dining menu.

“It always kind of annoyed us when you would go to a restaurant late at night and they would tell you they were closing because they weren’t doing any business,” says Chef-owner Bruce Bromberg. “We wanted to be that place that everyone could count on. That no matter when they showed up, they would have that exact same experience at 8 in the evening as they would get at 2, 3, 4 o’clock in the morning.”

Blue Ribbon had the good fortune of capitalizing on exceptional word of mouth early on. Restaurateur Drew Nieporent was among the first regulars, bringing in night owls such as Charlie Trotter and Paul Bocuse back in the day. But you don’t need a SoHo address and the allegiance of every off-duty line cook in town to pull in a post-midnight crowd. A bonafide segment of diners wants to eat after hours—and not just those looking to sponge away developing hangovers. Think late-night travelers, second shift workers, those with unconventional schedules and industry friends. 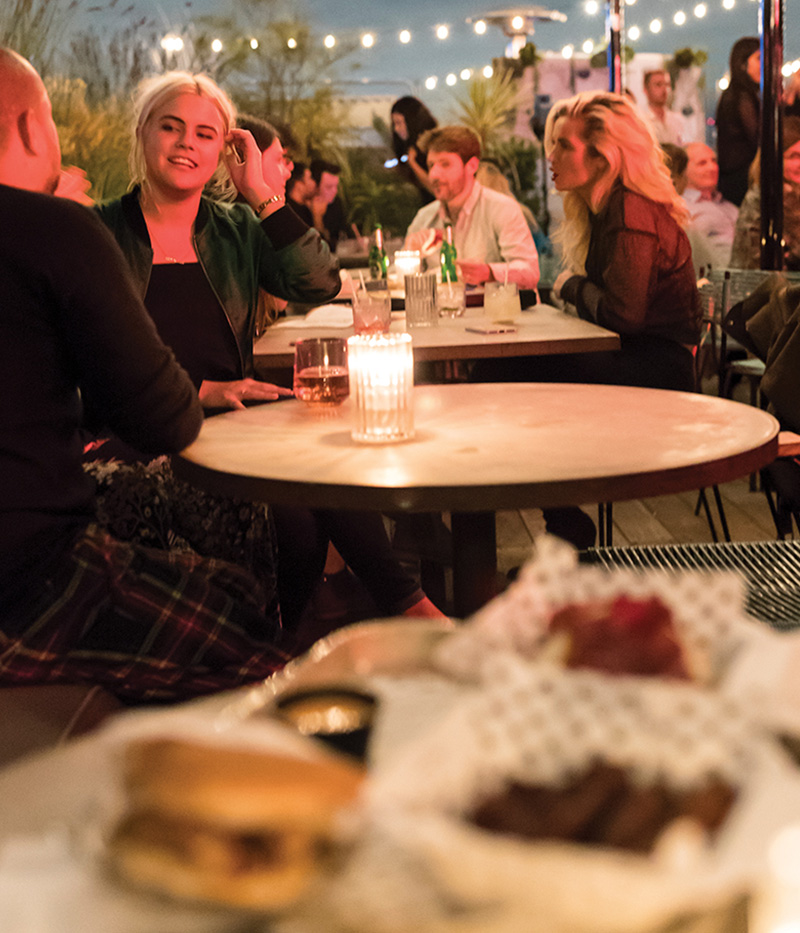 Location scouting
The Automatic is located in Kendall Square, a Cambridge, Massachusetts, neighborhood surrounded by restaurants that serve their last tables by 11 p.m. With a kitchen open until 2 a.m., owner Dave Cagle gets plenty of cooks, servers and bartenders rolling in for burgers and fries.

“We’ve become the central meeting place for service industry people,” he says. “Which is great because they order one of everything on the food menu and then buy rounds of shots for the whole bar.”

But other diners also want to eat after midnight, which Cagle figured out how to draw them in. “We’re close to a couple hotels, and I have relationships with the concierges,” he says. “People will ask where to go, and the concierges give us a call. We make sure to treat them like Kennedys when they get here.”

The Black Cat in San Francisco doubles as a restaurant and music venue. Owner Fritz Quattlebaum sees his fair share of drinkers looking to soak up alcohol, but with the typical northern California appetite that demands something healthy even after midnight. Then there’s the tech industry.

“Work schedules are changing,” he says, “Especially late night. It’s somebody working on a project. They will likely come by, grab a quick bite and probably head home to do some work.”

Keep it simple
Cooks aren’t generally accustomed to working early morning hours, so it can be tough to find the right crew. Chef Kevin Hickey of Chicago’s 4 a.m. bar Otto Mezzo hired a fellow chef and former colleague who worked with him at the Four Seasons to run the kitchen at the new Italian-inspired hotspot.

There’s only enough room in his tiny kitchen for two cooks, so Hickey designed a simple menu of paninis, bruschetta and pastas of the day. “I tried to keep it super, super simple and just budget really high quality ingredients,” he says. “The flavors are gonna be great, and you don’t need serious technique.” 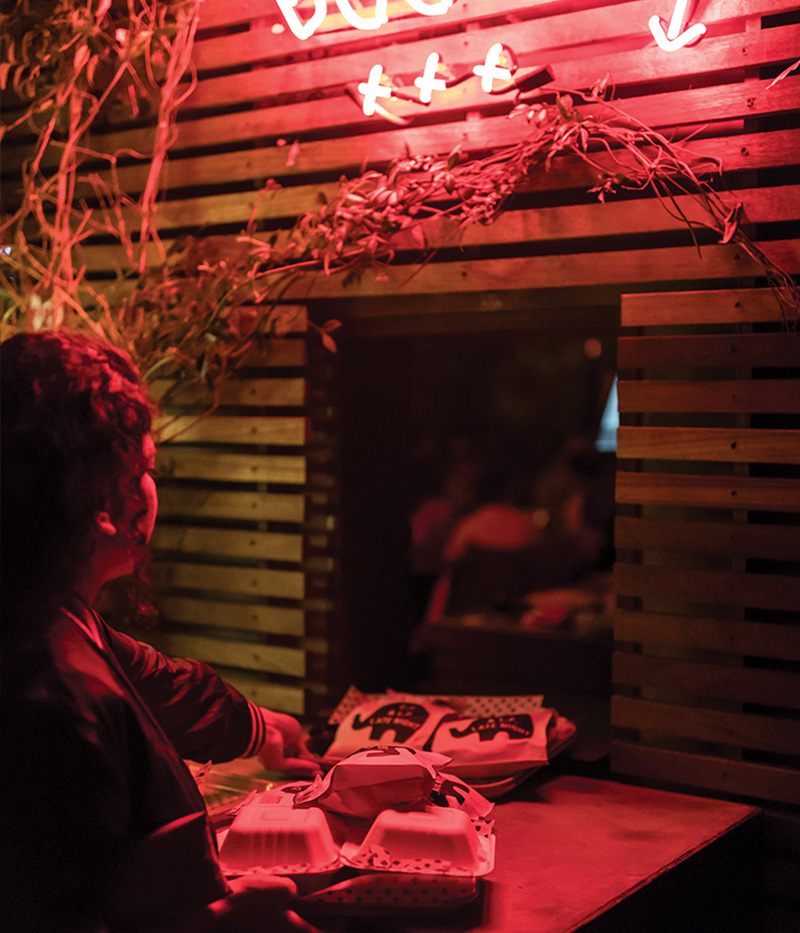 Rooftop bar E.P. on top of the restaurant L.P. in Los Angeles serves a four-item late-night menu from a back line separate from the downstairs dining room’s kitchen. Simple, easy-to-eat bites—chicken sandwich, tofu fries, pastrami bao—require just five minutes to serve and only daytime prep. “It’s kind of like junior chef-level guys that can get it out with consistency because it’s not too complex,” says owner Grant Smillie.

Don’t alienate your base
Drinkers might be the most important part of your bottom line, so create an environment that welcomes them without alienating diners.

“The most difficult part is trying to bridge both the bar crowd and the diners,” says Eric Shani, general manager of The Pikey, a neighborhood pub in Los Angeles. “We’ve done stuff to bring in the drinkers, like DJs during the week and trivia night in our private room. We have a comedy show on Wednesdays, which tends to bring in more drinkers.”

Stick to your guns
If you say you’re going to stay open, then stay open. Sticking to your posted hours, even during slow nights, will build customer loyalty. But take your time.

“A late-night menu is something that the staff and guests need time to digest,” says Daniel Kramer, managing partner at Duke’s Grocery in Washington, D.C. “If it doesn’t take off immediately, don’t be scared.” 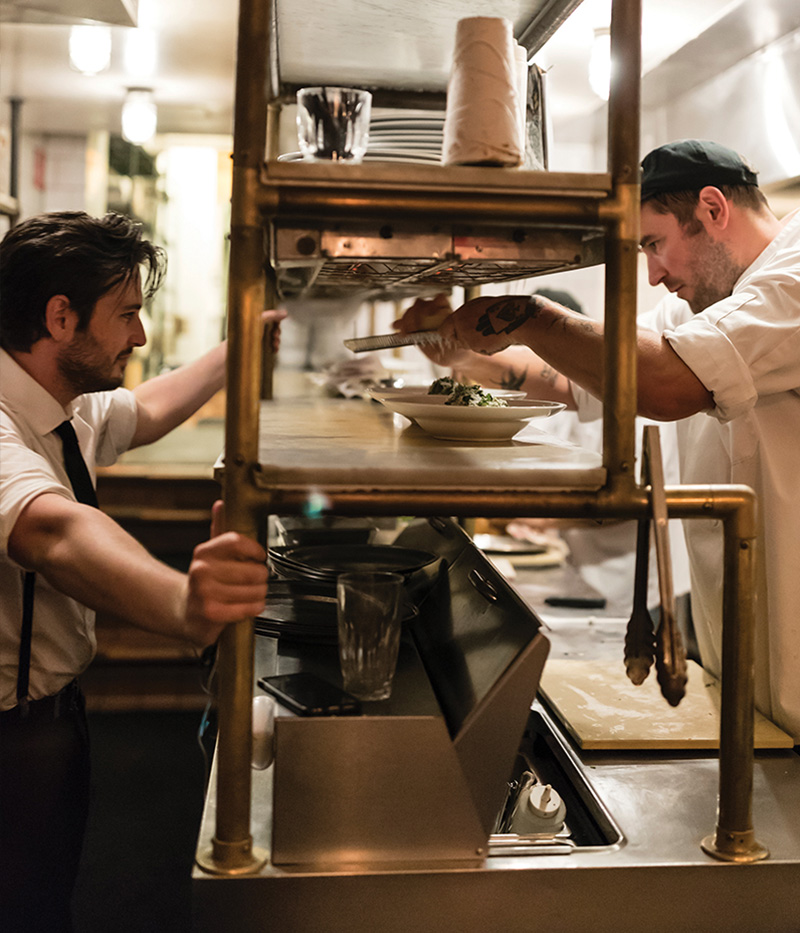 Chef Ralph Johnson at The Pikey and staff cater to regular and late-night diners with a variety of favorites, including shareable entrees and appetizers.

Ultimately, consistency and commitment are the most important aspects of late-night dining, Blue Ribbon’s Bromberg says.

“It takes a ridiculous amount of dedication, focus and discipline, but our success was sitting there at the beginning for three and half hours without a person walking in the front door and not closing the doors,” he says. “I think that’s paid off tenfold for us down the road.”

Most operators list burgers among their top-selling late-night menu items. But chefs tend to offer much more originality than what the nighthawks swoop in for. Here are our picks for three late-night heavy hitters.

Sorbetto al Mirto
Chef Kevin Hickey of Chicago’s Otto Mezzo collaborated with local producer Black Dog Gelato to conceive ice creams and sorbets to complement the Italian liqueurs served at the bar. The one made with Sardinian myrtle berry liqueur is a runaway best-seller.

Crispy Chicken Sandwich
“It’s a fairly spicy signature sandwich, which when you’re having a beer on the rooftop goes hand in hand,” says owner Grant Smillie of E.P. & L.P. in Los Angeles.

Mike Sula is an award-winning journalist who is proud to count himself as a late-night diner.