TO SERVE OR NOT TO SERVE? 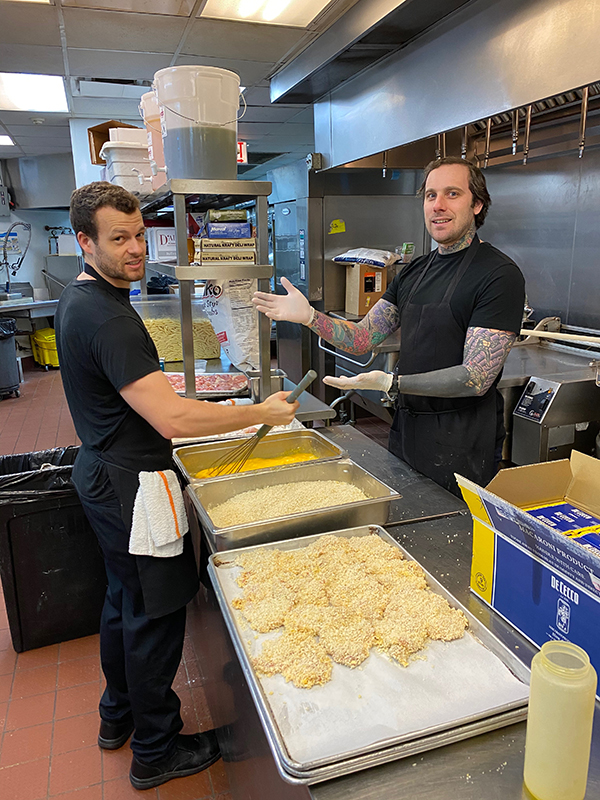 That’s suddenly the burning question of the moment – a dilemma that’s likely to reemerge if COVID-19 proves to be a seasonal threat. Although restaurants are considered “essential businesses” in states with shelter-in-place or social distancing protocols, a complex calculus needs to be performed in terms of balancing health issues, labor expenses, inventory costs and bottom-line revenues.

Foodservice is essentially facing what operations in hurricane-prone regions do yearly: Map out an emergency plan. But in this case, they’re steps for what to do if – or when – the next shutdown strikes. During the initial wave of the virus, three general models emerged: shutdown completely at the first sign of danger, remain open until health considerations demanded a temporary closure or muscle through by altering traditional business strategies. Analyzing these experiences may help others survive or reopen tomorrow.

After Illinois issued a statewide shelter-in-place directive on March 21, eight restaurants within the Chicago-based One Off Hospitality group – including The Publican, Pacific Standard Time, Big Star and Violet Hour – remained open for takeout and delivery with new safety protocols in place.

One Off’s initial moves may be a template for others moving forward. The organization took employees’ temperatures at the start of shifts and consolidated all concepts, except for Big Star, into its largest kitchen. Big Star, which has two locations, consolidated to its commissary, ensuring each kitchen area only produced one item. One station assembled fish tacos; another assembled pork tacos; another assembled chips and salsa. This reorganization – as well as bans that prevented workers from traveling from one restaurant to another – streamlined processes and ensured staff came into contact with as few ingredients and surfaces as possible. Alexander says he’s been especially impressed by how bar managers adopted more standardized methods of sanitizing equipment and tools between each cocktail. 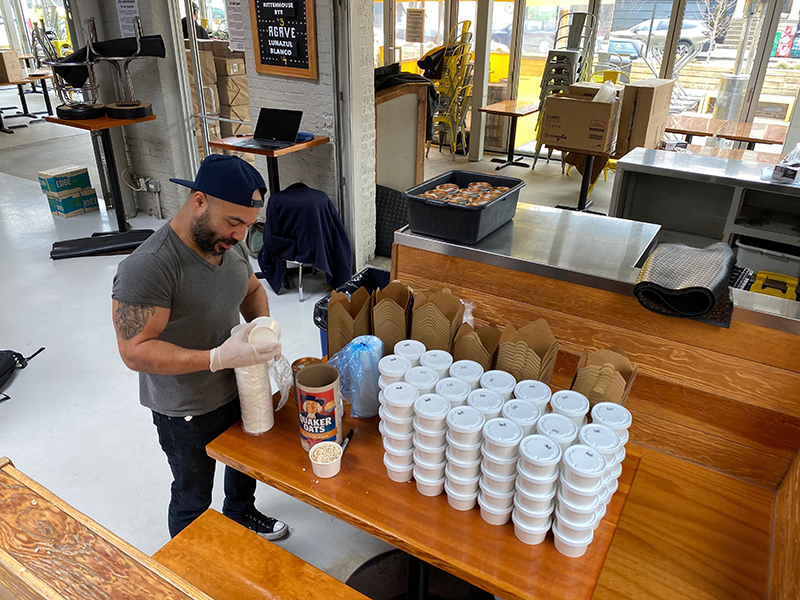 “Restaurants and bars will be five times safer than they once were,” he says. “All those procedures we put in place for the virus will likely become standard practice.”

But as local coronavirus cases grew over the next eight days, making Chicago a hotspot, One Off closed all of its operations. “That really forced our hand,” says One Off partner Terry Alexander. “We thought it was best for the safety of the staff and guests to pause operations until it was a little safer out there.” 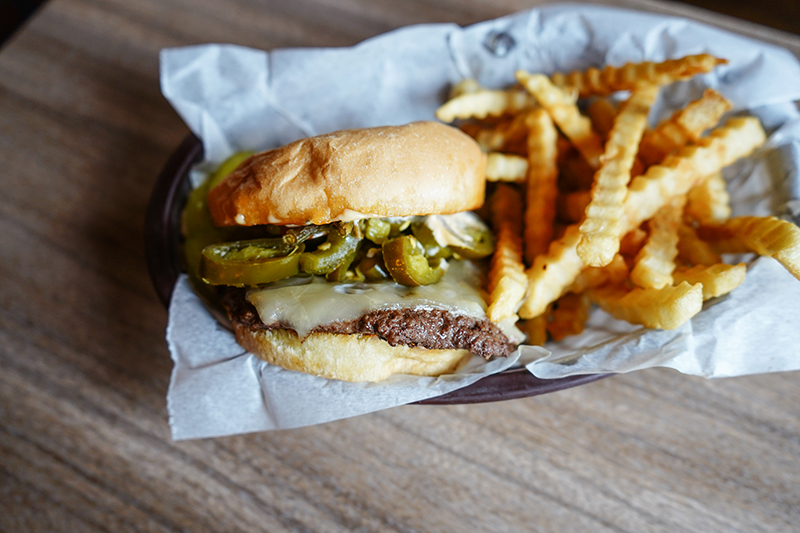 Although One Off wanted to continue serving food and providing some workers a paycheck, Alexander says a “to-go only” model wouldn’t have made sense financially in the long-term. Business, he says, was “busy but not necessarily successful.” So the group distributed remaining food inventory to staff and locked its doors for now.

In the wake of the coronavirus, it’s possible that the number of restaurants with large urban footprints and expansive menus will shrink. Don’t be surprised if operators who re-enter the market prioritize smaller spaces and more limited menus. Consider Sandy’s Tavern, a compact 38-seat restaurant in Richfield, Minnesota, which has been slinging burgers for 87 years. Owner Matty O’Reilly, who took over the tavern in November, closed his other Minneapolis-area restaurants, including Republic and Bar Brigade, but felt he could modify Sandy’s operations enough to keep it safe and afloat.

“The factors came down to this: It has an economical price point, it has a parking lot for pickup orders and it’s on a busy corner”
O’Reilly. 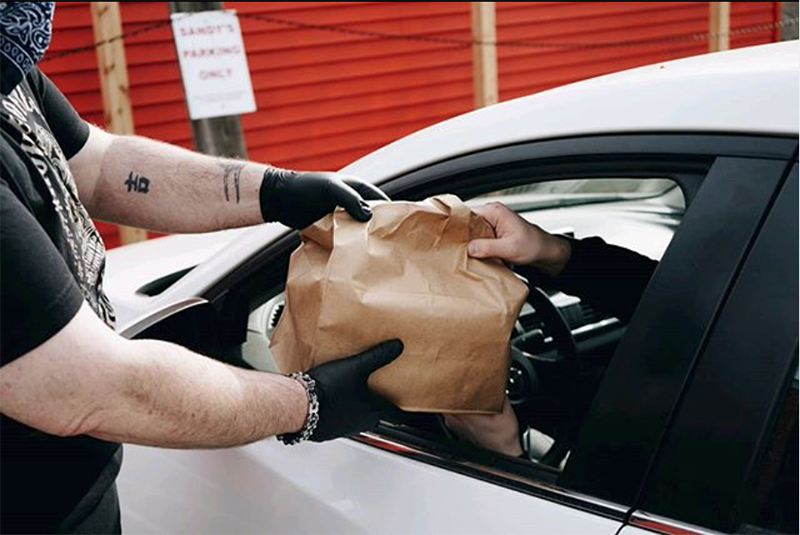 He downsized to a skeletal crew. He kept just one person in the kitchen and one person to handle phone and online orders, just enough to execute Sandy’s menu of burgers, sandwiches and fried appetizers. “The factors came down to this: It has an economical price point, it has a parking lot for pickup orders and it’s on a busy corner,” says O’Reilly.

It all comes down to basic cost-benefit analysis. “Do the simplest of break-even analysis without your fixed costs. If you’re doing $400 in sales and spending $420 in labor, shut it down. You’re going to need that money in 90 days (to reopen),” he says. “Your employees will need a place to come back and work. That’s as important as you hustling now.”

If there’s a downside to social media, he says, it’s that looks can be deceiving. Just because a restaurant posts images showing stacks of orders or packed drive-thru lines doesn’t mean they’re raking in money, as labor and ingredient costs can often outweigh incoming revenue. And he’s concerned that projecting exuberant images – including photos of staff high-fiving and hugging each other – sends the wrong message and can put staff at serious risk.

“There’s no way a one-cook operation can handle a 25-item menu. Why wouldn’t you just scale it down to have fewer people in the room?” he says. “You really have to take a step back and look at your whole system and ask: Is this even safe?”

THE STRATEGIC REOPEN: BREAKING EVEN

After initially closing March 22, Funkenhausen, a German-Southern restaurant in Chicago, spent nearly
a week poring over public health recommendations to determine whether it should reopen for takeout and delivery. Partner Dan Boyd and Chef/Partner Mark Steuer discussed it extensively with their managers but ultimately took a democratic approach and left it up to the staff to decide.

“I’ve been making it a point to ask (our employees) every day, ‘How are you feeling, not just physically, but mentally and emotionally? Are we still into this?’” he says. “I make it clear that we can pause or stop this at any time. If we need to close for a day because physically, mentally or emotionally you’re not into it, we can.”
— Dan Boyd, partner at Funkenhausen

“They told us (reopening) was something they wanted to do to keep the team together with some purpose,” Boyd says, so Steuer reopened for curbside takeout and third-party delivery. “It’s to keep the team engaged. We are able to pay the salaries of those people still working and a to-go business does help offset some of the expenses.” 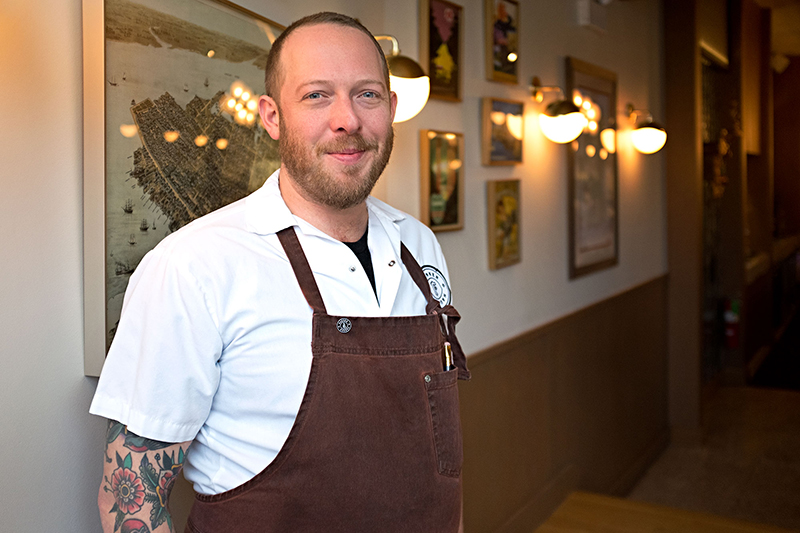 Funkenhausen employed new safety measures – spreading three kitchen workers out between its two large kitchens and stepped up sanitizing procedures. Plus, it reworked the menu to make it easier to deliver. Instead of pork chops, schnitzel and ricotta dumplings, offerings now include a chicken dinner for four and a breakfast burrito on weekends. Plus, chefs have streamlined ingredients so they only require one delivery from one vendor once a week. The restaurant is also selling its wine and beer inventory with to-go orders and has stopped accepting cash. 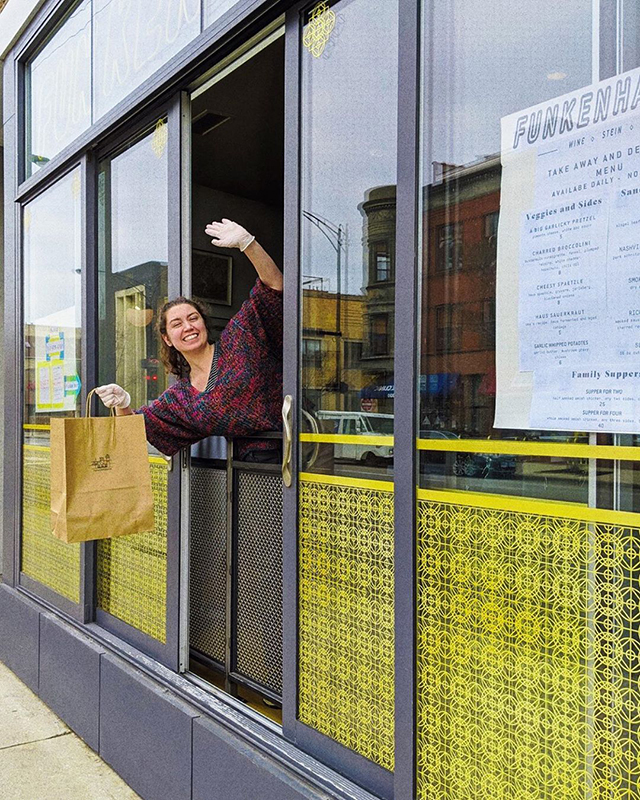 Takeout orders have mostly come from repeat orders from regular customers, which may point to the future benefits of opening neighborhood restaurants instead of high-traffic, high-rent urban-center locations. Although revenue is down 90%, this income stream is just enough to defray the salaries of the remaining staff – with payroll now roughly equivalent to rent.

Still, Boyd says, staying open isn’t about making money; it’s about doing what can be done to keep its core staff employed and emotionally healthy. In the long run, Boyd believes that will put Funkenhausen in a better position to reopen for on-site dining.

“I’ve been making it a point to ask (our employees) every day, ‘How are you feeling, not just physically, but mentally and emotionally? Are we still into this?’” he says. “I make it clear that we can pause or stop this at any time. If we need to close for a day because physically, mentally or emotionally you’re not into it, we can.”