Rich Melman knows what diners want to eat before they do. It’s an insight that built his $500 million empire, Chicago-based Lettuce Entertain You restaurants, over the last four decades.

His first restaurant, R.J. Grunts, which features a more-than-40-ingredient salad bar as its centerpiece, issued in customization decades before it became a buzzword.

Not all his concepts have endured, but they are always trend-forward: from a kitschy ’50s diner (Ed Debevic’s, now sold) and retro steakhouse (Wildfire) to upscale French (Everest) and tiki bar (Three Dots and a Dash).

Melman, 73, won’t cop to being the grandfather of the concept restaurant, even after earning the James Beard Foundation’s lifetime achievement award this year for his “positive and long-lasting impact” on dining in America.

But he’ll answer questions on how he achieved success with more than 100 Lettuce restaurants. Sharing knowledge is so important that it’s the underpinning of his latest concept, Intro (see below). The restaurant brings in a new chef every two to three months, providing all the support to open and run a restaurant, including the space, staff and paying customers.

Here’s Melman, the founder and chairman, whose company turns 44 next month, in his own words:

Q: What are three of the most important things restaurant owners need to do to be and stay successful?

A: You have to have good food; that’s number one. It’s got to taste great, it has to look good, be presented well, and it has to be a good value for the customer. But you also need to make money. That’s number two. And you have to do the right deals early on. The concept, the location, the lease, the hiring of the people, the training—it all goes into the planning. I have a belief that 80 percent of a restaurant’s success takes place before you ever open your doors.

Q: At Lettuce, you focus intensely on the importance of partnerships, especially sharing responsibilities and profits. What are the roots of that philosophy?

A: In the ’60s, I worked for my father and his partner for four years. I had saved up $10,000. So I went to them and said, ‘I’d like to buy into the business. I’d like to be a partner with you.’ They said, ‘We appreciate your hard work, but we don’t think you’re settled enough. If you got married and had a family, we would then consider a partnership for you.’

I thought to myself, ‘I don’t even have enough time to date.’ I was working six or seven days a week from 5:30 in the morning to 6 or 7 at night. I started to realize how important it was to feel like you’re a part of something, that you’re a partner in a business.

A week later, I gave my notice. Eventually, I met a man named Jerry Orzoff who believed in me. Not only did he put money in, but he gave me the guidance and direction that I needed. That changed things. For $25,000 to $50,000 you could have owned a big piece of Lettuce Entertain You. And that—I guarantee you—would have been a hell of an investment

Q: Why did you decide to use Tock, a ticket based reservations system, for your newest restaurant, Intro?

A: My kids have gone into a partnership with Nick (Kokonas of Next), and I think it might be revolutionary. It’s going to be nice to know ahead of time that people have paid and you’re not going to get all those no-shows. One of the things that I love is that if you come early on a Tuesday, you pay less than prime time on a Saturday.

Q: You’ve created numerous restaurants and concepts over the years; where do you find your inspiration?

A: It’s really simple—from the food. Nothing else. We have a test kitchen, and when someone gets an idea, I say, ‘Talk to me with the food.’ If I love the food, I do it. We can figure out what it’s going to look like, how many seats we need, the financials and all that stuff. But the one thing that’s unequivocal to me is I have to be excited about the food.

Q: Once you settle on a concept, what type of research do you do?

A: I eat, I read, and I explore and meet with our creative teams constantly. I think I know what the average person likes … and what their tastes are. Generally speaking, I look at one or two things at a time. I don’t create five restaurants at a time. If I’m thinking about an Italian restaurant, I’ll eat a lot of Italian food. I’ll say, ‘Let me try pastas this week.’ And I’ll eat pastas in five or six different places. You learn something if the food is good and something if the food is bad.

A: You don’t have to go to a four-star restaurant to get great food. I think a lot of chefs, after a while, don’t want to work with tweezers. I have found it is harder to make good money in fine dining restaurants. The type of restaurants where people want to come once a week or every two weeks, instead of once a year, usually do more sales. And that’s one of the keys: How do you get more sales? When you get sales, everything else falls into line.

Q: How has the advent of social media changed your business model?

A: When I started, it was all word of mouth. Now, it’s a combination of social media and word of mouth. Today, in two days the whole country knows what you’re doing, as compared to in two years when I first started. We also use social media for customer service. We can get to a guest while they are still in our restaurants and help elevate their experience in real time.

Q: Now that you’ve been in the restaurant industry for more than four decades, how would you sum up its impact on you personally? 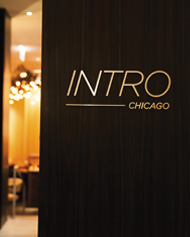 Head of the Kitchen Classroom

Since February, Rich Melman has been conducting a culinary experiment in his former Chicago fine dining restaurant, L20.

At his newest restaurant, Intro, the executive chef changes every two to three months. Each new chef is supported by an established front and back of the house and works with Lettuce partners as business mentors. The chefs also get a percentage of profits during their tenure at Intro.

If chefs are interested in applying for a chef-in-residence position at Intro, they can share their resumes at IntroBOHemployment@leye.com.