American restaurateurs big and small can be sure of at least one reality: in the coming years, some of their fiercest competitors will be international chains breaking into the U.S. market. The industry has seen an uptick in international brands trying to get a foothold here, though the speed and depth of this migration are elusive to date, says Renee Lee, a senior publications specialist at Datassential. For the most part, it’s been anecdotal.

That’s about to change, though, because American diners are ready for international players. Sixty-six percent of respondents to a 2015 National Restaurant Association study said they’re more likely to eat ethnic cuisines than they were five years ago, while 85 percent said they want to eat ethnic dishes at a restaurant that specializes in that cuisine. Increased economic growth abroad is producing enough excess capital for chains to tackle the American market. In addition, the rising popularity of fast-casual restaurants has created opportunities for more diverse concepts. Foreign restaurant groups also are targeting cities with concentrated populations of people who are familiar with the food.

To better understand the strategies, history and appeal of these chains, we’ve profiled five international brands with an eye toward what’s been propelling their success.

The Story: Although the origins of Paris Baguette can be traced to a single bakery in South Korea, the chain’s from-scratch products are as French in spirit as anything you’d find in an old-world boulangerie. The chain bakes its breads and pastries—all of which are lighter and airier than typical American bakery products—in-house, imbuing its stores with alluring aromas. The chain has gone against the grain by prioritizing flavors above all else, says Larry Sidoti, chief development officer. Offerings run the gamut from chocolate croissants and blueberry yogurt cream cakes to garlic-cheese baguettes and sourdough soup bowls.

What has proven most surprising to Americans, Sidoti says, is the layout of its stores, which blend self-service displays with traditional counter service. By providing customers the freedom to select which items they want, Paris Baguette satisfies their demand for customization in a unique way. In addition, time-stamped sticker tags are placed on each item detailing when they were baked. Staff constantly checks inventory, baking new items as needed to ensure maximum freshness.

Locations: 1,200 locations, including Chicago and Virginia, spread among five continents.

Lesson Learned: Everyone loves dining rooms with a unique ambiance.

The Story: After introducing much of the world to its famous chicken—birds marinated for at least 24 hours in PERi-PERi sauce, made with spicy African bird’s eye chile—Nando’s PERi-PERi entered the American market in 2008 with a Washington, D.C., location. After launching in South Africa, the founders wanted to create a new genre of dining, one that hovered between fast casual and premium casual, by fusing traditional dining expectations with casual dishes.

Customers dining in are greeted by a host who reserves a table, preventing others from scrambling for spots as seats become available. In-store diners then order and head back to the dining area decorated with South African art to wait for their food. When their chicken arrives 10 to 12 minutes later, guests are encouraged to eat with their fingers, following the custom in South Africa.

The Story: When the China-based Tom’s BaoBao chain opened its first U.S. outpost in Cambridge, in July 2016, it aimed to introduce American consumers to the same food and flavors they would encounter in Asia. Because the menu at Tom’s BaoBao is composed exclusively of bao buns—1,200-year-old leavened-dough dumplings—its new U.S.-based chefs trained for three months, many in China, learning how to properly mix, knead, cut and form each bun. Each bao is stuffed with a classic filling, such as curry beef with carrots, pork with scallions or chicken in a bean sauce, and steamed in bamboo-based baskets, hand-woven by villagers in a remote town in Northern China.

The physical layouts of its U.S. stores are encased in glass so that customers can see the steamers in action, examine the intricate baskets and, most importantly, watch the balletlike movements required to create each bun. The transparency of the chain’s operations has proved fascinating for children but also appeals to college students and urbanites who gravitate toward brands that showcase authenticity and artisanal craftsmanship.

The Story: When Italian-born Carlo Ruggiero—co-founder of Kono To-Go’s U.S. operations—visited Italy in 2012, he came across a cafe selling Kono pizzas. They are the brainchild of famed Italian Chef Rossano Boscolo, who shaped crispy high-quality pizza dough into cones and filled them with traditional pizza ingredients.

In Italy, diners often eat Kono pizzas leisurely in cafe-style settings, but Ruggiero and his partner, David Ragosa, tweaked them for on-the-go American consumers. When they opened the first Kono To-Go store in New Jersey, they wrapped the pizzas in tissue and set them in a square base, so they’d be easy to place in car holders, carry across malls or eat while talking on a cellphone. Ruggiero and Ragosa also expanded their offerings, stuffing the cones not only with Italian staples like pepperoni, chicken parmesan and meatballs but also American combos such as peanut butter and jelly, and fudge brownies.

Finding a niche in today’s dining market lies in tapping into an increasingly mobile society, says Ragosa. His Kono franchises include brick-and-mortar stores as well as kiosks and mobile food carts, which he believes will be a hit at events such as concerts, festivals and wine tastings.

Lesson Learned: Stick to what you know best.

The Story: The expansion of the Brazilian-based food chain Giraffas into the U.S. in 2011 was predicated on the unmet need for exotic interpretations of familiar favorites, which the chain calls “approachably unknown” cuisine. At Giraffas’ U.S. locations, diners can order hamburgers made with a picanha blend, Brazil’s famous tri-tip steaks, yucca fries with spicy Sriracha mayo and grilled-to-order salmon dressed with Bahia butter made with coconut milk and Sriracha.

The chain’s transition to the U.S. demanded some tweaking. In Brazil, Giraffas is a quick service outlet that competes with McDonald’s and Burger King. However, in the U.S., they’re a fast-casual spot, positioned as an affordable alternative to Brazilian churrascaria steak-houses like national chain Fogo de Chao.

Giraffas’ take on Brazil’s affinity for simple grilled seafood, chicken and steak has resonated most deeply among U.S. diners. Made to order in eight to 12 minutes, these platters can be customized with healthy sides such as grilled vegetables, simple salads and organic quinoa, all of which have attracted a swath of health-conscious diners.

How to Make a Solid First Impression

Raise the Bar:  Whiskey, tiki and even cider bars have made a show in recent years, but one of the world’s least expensive Michelin-star restaurants, the Tim Ho Wan dim sum chain from Hong Kong, outfitted its first U.S. spot in New York City with a tea bar, where guests can learn about and sip rare teas. 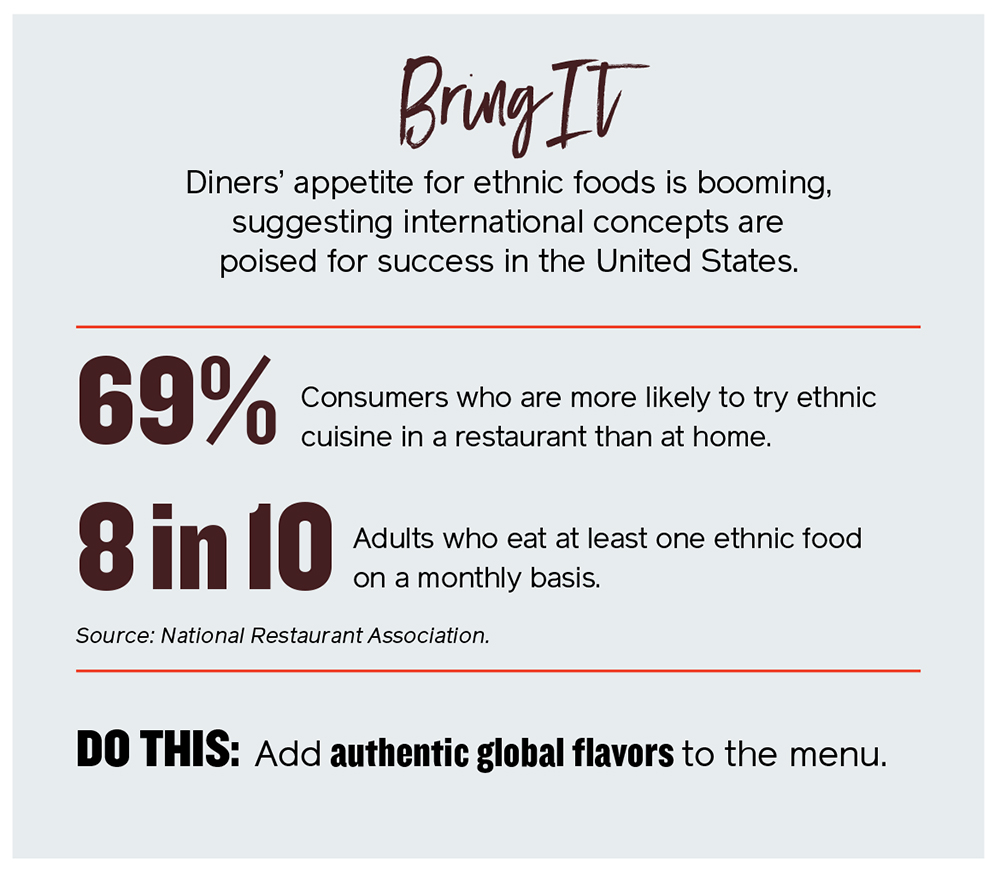 Create an Exhibit: Kizuki, which recently shortened its name by dropping descriptors ramen and izakaya, customized the entrance of its Chicago location with background on the concept. Guests can read about the history of ramen and learn about the time-consuming process of making Kizuki’s broths and noodles.

Don’t Make them Get Up: At the London-based Yo! Sushi, the menu of nearly 100 Japanese items, including sashimi, teriyaki favorites and maki rolls, are served on plates color-coded to reflect different price points. These items travel through the restaurant on conveyor belts, allowing guests to grab their food without leaving their seats. Customers don’t seem to mind standing for a while first as they wait for tables in U.S. locations that include Boston and Central Valley, New York.

Peter Gianopulos is a restaurant critic and adjunct journalism professor who’s been covering food and business for 20 years.

Philippines-based Jollibee has developed a cult following across the U.S. with its Chickenjoy fried chicken and spaghetti topped with ham, hot dog and ground beef. See what else is heating up on our Trend Tracker.