An alarm sounded for Lars Kopperud as he reviewed employee paperwork for Mafiaoza’s in Nashville, Tennessee.

Over the 18 months since opening in 2005, the Italian restaurant had hired and lost more than 200 employees.

“Our turnover was incredibly high,” says Kopperud, the restaurant’s co-owner and operations manager. “I knew our employees were our most important asset, and we needed to establish practices that would keep people with the company.”

In an industry with chronic labor shortages and turnover at around 72 percent, retaining top workers should be paramount considering the financial consequences. Businesses spend an average $3,328 to replace one retail employee earning $10 per hour, according to the Center for American Progress.

Loss of revenue, however, shouldn’t be the only motivation to nurture, develop and incentivize staff. Turnover handicaps every shift—namely workers picking up the slack—and ultimately affects the guest experience.

“Having a great team allows us to better serve our guests,” says James Sanchez, culinary director and head chef for Freebirds, a fast-casual chain based in Austin, Texas, with 127 locations.

Finding the right workers is about more than reviewing resumes. In fact, Kevin Gillespie, chef-owner of Atlanta-area restaurants Gunshow, Revival and Communion, isn’t interested in resumes or restaurant experience. When he interviews potential hires, he asks for anecdotes to gain insight into how they respond to tense situations or mistakes. Those responses help Gillespie learn more about their character.

All candidates work at least one shift as part of the interview process, and the staff weighs in on their attitude and performance.

“We use the same process whether we’re interviewing a dishwasher or a sous chef because I want to bring someone in who might become an assistant general manager or general manager,” Gillespie says. “Right from the interview, we’re building a culture that encourages our employees to grow with us.”

It works. Most of the employees at Gillespie’s restaurants have a tenure of at least a decade, including the current chef de cuisine at Gunshow, who started as a line cook.

Freebirds also believes in creating a culture that provides opportunities for its staff and promotes from within. Sanchez points to a teenager who started in the back of the house in 2012 and worked his way up to senior general manager.

“These are the stories we tell our new hires,” he says. “We want to show folks that we are the place to work, and we look to our (internal staff) to fill key positions, especially when we open new markets.”

To ensure the employees at Freebirds are prepared for promotions, the leadership team starts by measuring whether they’re excelling in their assigned roles. In addition to providing comprehensive on-the-job training, employees have a development journal that outlines the responsibilities of their current role and gives them—and their supervisors—opportunities to record progress, highlight successes and share information about their goals.

“It’s a real-time scorecard of where they are in their development,” Sanchez says.

“Giving direct feedback isn’t about criticizing, (and) we tell employees, ‘We want you to work on this because we want you to stick around,’” he says. “Our whole approach to management is about retaining employees and growing our people, so we can provide them with new opportunities.”

Mafiaoza’s incentivizes and demonstrates its commitment to employee development with its checkbook: The restaurant has paid for employees to pursue sommelier and cicerone certifications, attend management seminars and learn operations skills like QuickBooks. The partners have also paid tuition for one of their promising kitchen managers to attend culinary school.

“When our employees feel like we are invested in them, they feel invested in us,” Kopperud says.

The investment goes beyond dollars and cents.

Freebirds encourages employees to come to weekly meetings with ideas to improve food and operations. Over the summer, the assistant kitchen manager developed a lighter pizza option made with arugula, goat cheese and apricot, which is now featured on the fall menu; a manager suggested dedicating two parking spaces for short-term/to-go order pickup, an idea the leadership team loved.

At Gillespie’s restaurants, managers handle formal reviews—but that doesn’t mean he’s cut off from the staff. He engages with all of his employees, from chopping vegetables alongside a prep cook to mentoring an executive chef who wants to own his own restaurant.

“People value it when you go to them after a long shift and say, ‘I appreciated your hard work and focus tonight.’ It shows that you were paying attention to them,” he says. “A few kind words go a long way.” 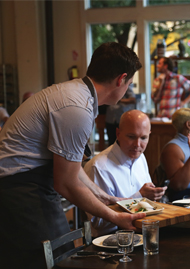 10 commandments for recognizing and nurturing talent

For some restaurants, good help isn’t hard to find. Operators known for running successful restaurants with low turnover share how they recognize and nurture talent. Here are the
10 rules they embrace.

1. Establish a culture that fosters loyalty.

4. Invest in employee success by paying for external certifications and training programs.

9. Get involved with employees at all
levels of the restaurant.