Chef Chris Coombs found a perfect spot for the second location of his restaurant Boston Chops. There was just one glitch: It had no windows, so no natural lighting.

Coombs knew that photos of his food would come out dim and pixelated. Not only would this pose challenges for in-house food photography, it would render guests’ Instagrams flat and unappealing.

He chose the location but built a table for photo-snapping diners by reservation only – one decked out with adjustable lights overhead and on the table’s sides.

“A lot of these serious food Instagrammers or photographers, they bring their own lighting systems to dinner, and it’s really intrusive to other diners. And that was really how the idea initially formed,” Coombs says. “We wanted to give them what they needed to take beautiful photos, but not disturb other guests.”

An extreme example of catering to today’s social media-addicted customers? Perhaps, but the logic behind the move is sound: more diners than ever are tethered to their smartphones, snapping photos and updates and posting them in real time. According to a 2017 survey by Maru/Matchbox®, 69% of millennials snap a photo of their food before eating. And if 33% of customers discover new businesses through social networks, then those photos have real value.

Luckily, what the Snapchat and Instagram crowds seek from a restaurant isn’t so different from what other diners want: a memorable experience, some eye-catching details and the chance to feel special. How that’s delivered, however, makes all the difference. 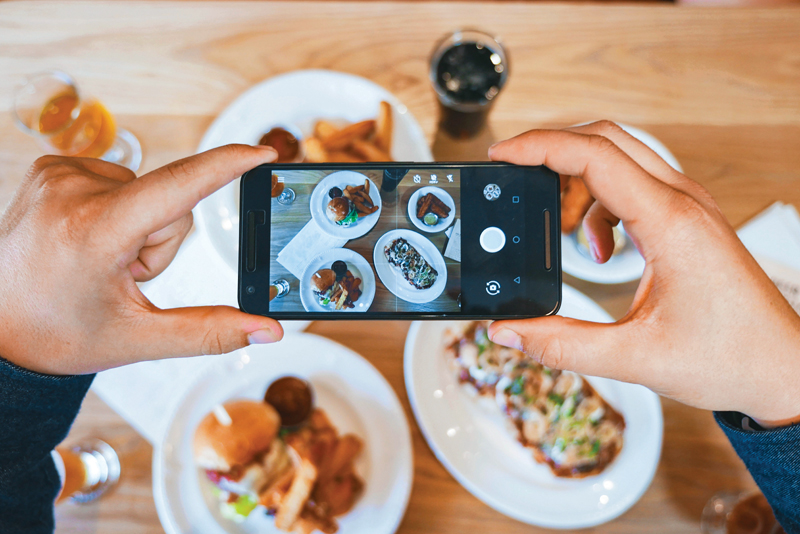 Strategically curated artwork can be similarly magnetic, especially when it captures a particular mood or idea. At Steak 48, striking black-and-white closeups of women wearing elegant hats upends the notion that it’s a boys’ club-only steakhouse, while at Denver’s Mister Tuna, a dynamic mural of a women’s lips highlights the artistic nature of its industrial chic space and creative platings.

When it doubt, go local or symbolic. Detroit’s Townhouse has a chalkboardesque mural extolling the virtues of its fair city, while Fox In The Snow Café in Columbus, Ohio, encourages selfies in front of a wall illustration of its namesake fox.

“Our new restaurant, Taco Chelo, has been called ‘Instagram-friendly,’ and we designed it with that in mind,” says Lauren Saria, marketing director for Chamberlin Hospitality. She points to a huge red neon sign against a brick wall that reads “Taquero mucho” as a major draw. “The neon sign was handwritten, and a lot of our furniture is custom. That adds to the space being one-of-a-kind and interesting.”

ALL FOOD CAN BE PHOTOGENIC

Food can look different in a photo than in person, so consider lighting: Does your space offer enough windows or soft light sources during all times of day? Consider angles: A customer’s line of vision is a downward slope to the plate, but food instagrammers might take shots from table level, overhead or from a distance. Does your plate offer vertical and lateral intrigue? Consider the palette: are the colors vibrant and fresh?

Then there’s the whimsy factor. There’s a thin line between novelty – doughnuts in a Chinese takeout container, say – and absurdity, so plate with your identity in mind.

The tiki culture at Lost Lake in Chicago allows bartenders to go wild with fresh garnishes, swizzle sticks and umbrellas, including its iconic banana dolphin garnish.

“Each of the garnishes is functional,” says co-founder Shelby Allison. They correspond with an ingredient or produce an aroma that highlights an ingredient in the drink. And the swizzle stick is part of the grand tradition of cocktails.”

There’s no doubt that “Influencers” are the pinnacle of this social media triangle with the potential to sway thousands of followers. But it’s also true that today’s upcoming Instagrammer may become one of the chief influencers of tomorrow.

The solution? Treat them like they’re insiders. Consider inviting influencers to new-menu rollout or private events, says Coombs. A private event lets them properly style their photos and allows the kitchen to plate each dish perfectly. If an influencer has 200,000 local followers in a particular market, the right event can generate real social media reach.

What can’t be ignored is how important service remains, especially during regular dining hours. If your service is not on point, you’ll read about it in the caption to that gorgeous photo. “You can’t take a picture of service, but you can certainly comment about it in a caption,” Combs says. “I think if you give people a tremendous experience, they’ll reflect that in the post.”

Not every restaurant can draw in A-list – or even B-list – celebrities, but there are benefits to inviting well-connected social media personalities, including guest chefs, bartenders or even musicians.

Lost Lake brought in Elliott Clark, a Denver-based bartender and the photographer behind Instagram account @apartment_bartender, which has 50,000 followers. Clark guest bartended for a night at Stranger In Paradise, a smaller “experimental” bar space adjacent to Lost Lake.

“We packed the house for hours,” Allison says. “I did maybe two Instagram posts promoting it, and he did some stories and posts and like 100 people came. Which to me, for so little work and promotion, was very successful.”