You see it on thousands of menus: that sad, over-roasted half-chicken near the bottom of the page. Worse yet: a dry chicken breast that tastes like tofu with feathers. It has become a protein staple for the least adventurous eaters.

Well, long live great chicken! It doesn’t need to be boring. Novel preps, clever sides, heritage birds, healthy applications, new approaches and great presentation can wake up the sleepiest of palates and attract even hardcore carnivores back to this once-humble flightless bird. Just because it’s healthy, low in fat and relatively inexpensive doesn’t mean it can’t blow diners away.

Introducing: The Best Chicken in the World

Before the advent of factory farming, chicken was a luxury protein akin to lobster. Birds grew slow, lived long and enjoyed the kind of free-range exercise that builds muscle, burns fat and develops real flavor. These creatures still walk the earth.

At Le Coq Rico, the Manhattan outpost of his Parisian “bistro of beautiful birds,” Chef Antoine Westermann serves five heritage breeds, each with distinct flavors and textures. For his Alsatian baeckeoffe, a French casserole dish, a whole bird is cooked low and slow in an earthenware vessel with Riesling, artichokes, tomatoes, potatoes and onions.

Westermann uses a large, juicy, rich-tasting breed called a Brune Landaise because it’s closest to the Poulet de Bresse he gets in France ($140). Birds of this pedigree command a high price for a good reason.

“Brune Landaise have a longer life—up to 90 days longer than that of a regular chicken—and require high-quality grains, special housing and transportation directly from the small farmers to our restaurant,” he says. “Only a small amount of each of these heritage breeds are raised by each farmer, and these factors have an influence on the price.” 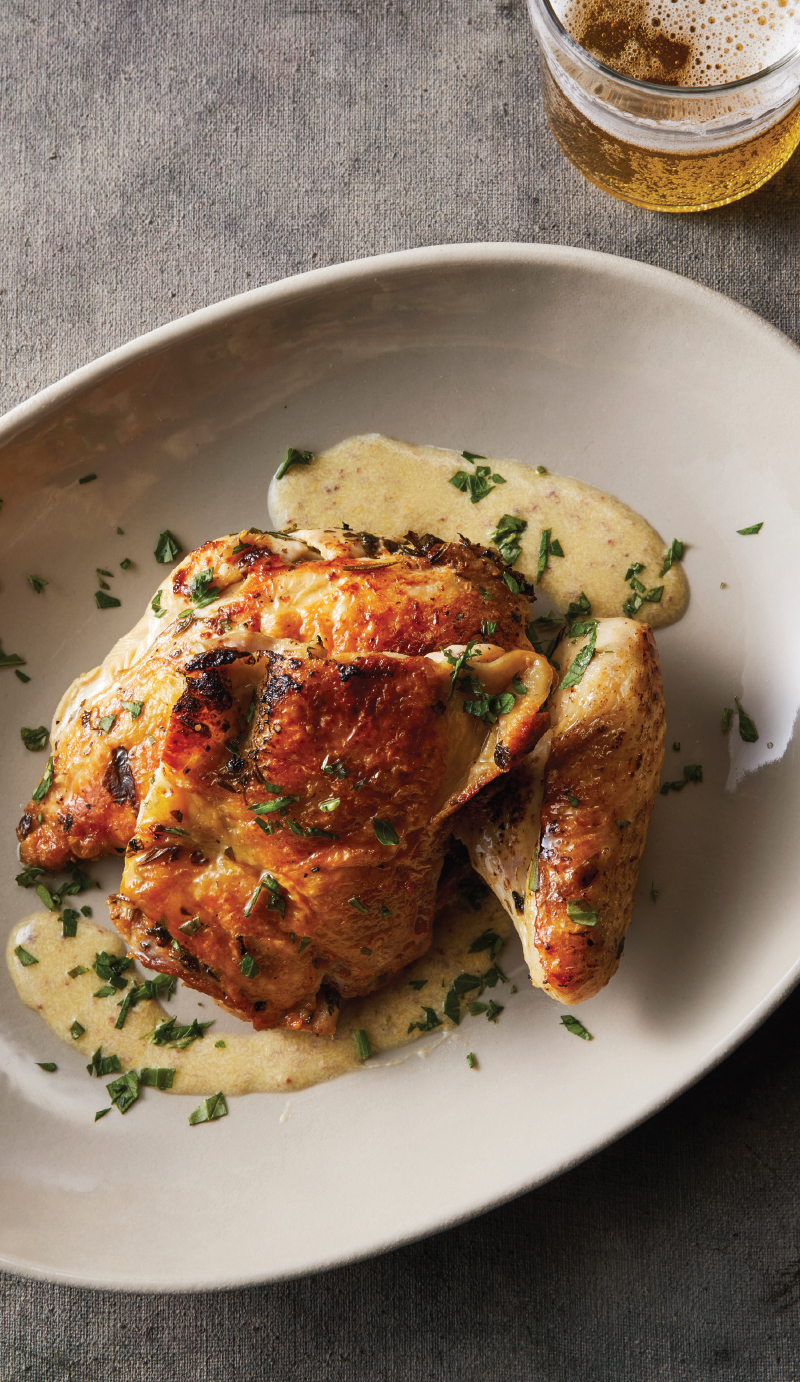 The chicken at Crossroads in Chapel Hill, North Carolina, is deboned, flattened and pan roasted in a cast iron skillet and served with a mustard tarragon sauce.

Bring it with a Brine Recipe

A 24-hour brine is critical to infusing the flavors of Morocco into the family-style whole chicken with preserved lemon and green olives at Mourad in San Francisco. Chef Mourad Lahlou submerges the organic pasture-raised chicken in a brew of water, sugar, salt, preserved lemons, cracked green olives, parsley, thyme, bay leaf, garlic, whole black peppercorns and Spanish saffron. Then they air dry in the walk-in for three days to ensure a crispy skin. The chicken is roasted to order and broken down into eight pieces, plattered, and glazed with olive and preserved lemon syrup, then garnished with fried parsley and cipollini onions roasted in chermoula.

At Souvla in San Francisco, Chef Tony Cervone discovered a magical brine sitting right under his nose in the buckets of feta cheese the restaurant uses for its signature Greek sandwiches and salads. He dilutes the salty leftover liquid by half, then submerges whole chickens in the brine overnight. They’re rubbed with dehydrated lemon peel, black pepper and oregano, spun on the rotisserie, and sold out the door for $20 apiece.

“It stays this really caramelized brown,” he says. “But the flavor is what really made it for us. It’s so different from a normal brine. It has this creamy salinity to it, and you really taste the tart saltiness of the feta in the chicken.” This method doesn’t hurt his costs either. “We’re using that whole bucket of feta, when before we were throwing away this liquid,” he says. “We’re able to save a little there.”

At Le Coq Rico, Antoine Westermann serves five different heritage chicken breeds harvested at different ages. The birds are poached gently for one hour, roasted for 30 minutes and served with a pot of jus and a green salad. Here’s a look at some of his best chicken:

Strong body, loves running and fighting, which results in very tasty, juicy meat without a lot of fat.

Moderate size, calm and easygoing with a rustic flavor.

Cool and easy living bird, raised free-range and grain-fed with a large body, which delivers juicy, rich meat and an elegant taste. 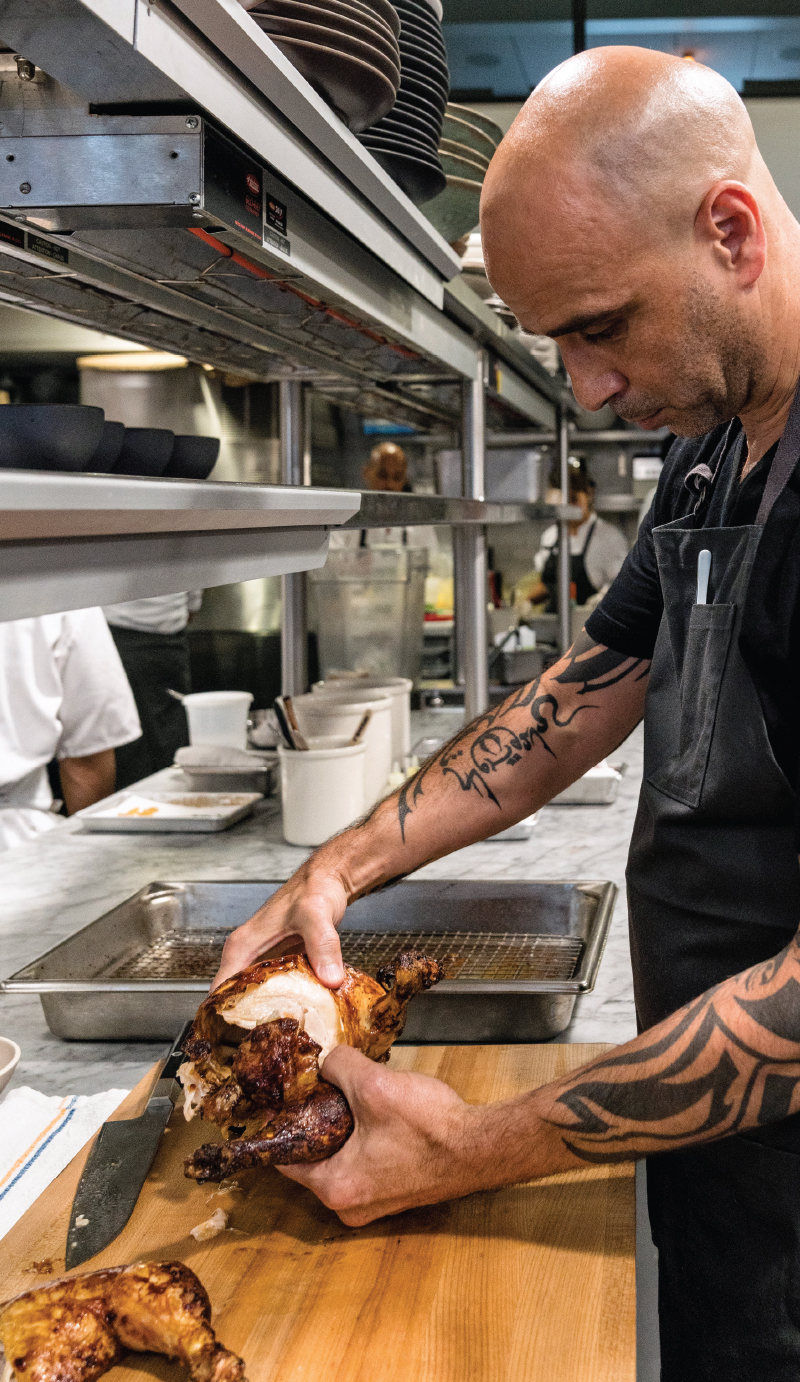 Chef Mourad Lahlou gives chicken as much love as any other protein because he knows just how satisfying perfectly roasted chicken can be.

Spit Roast Chicken Goes Round and Round

Casual rotisseries are a neighborhood fixture throughout France, prompting Chef Michael Denoun and his partner to bring an outpost of their Parisian mini-chain Mon Petit Poulet to California. At their Venice Beach location, they spin organic birds over basins of jus, seasoned with onions, carrots and a turmeric-curry spice blend. The roasting chickens add their fat to the liquid spiked with herbs (thyme, rosemary) or fruit (figs, olives, oranges), depending on the order. Birds are sold by weight with a serving of jus ($9.95 per pound).

There’s room for a rotisserie in upscale spots, too. The Argentinian grill at The Brass Rabbit in Healdsburg, California, is outfitted with a rotisserie attachment that Chef Shane McAnelly uses to roast half chickens brined in lemongrass, makrut lime leaf, onions, bay leaf, coriander, black peppercorn and garlic.

“(During prep) we poke a bunch of really small holes in the skin. We found that we really get crispy chicken skin that way, (as) the fat would escape and cause the fire to caramelize that area,” McAnelly says.

During service, cooks crisp the chicken in sauté pans, deglaze with a chimichurri that echoes the brine formula and serve it with a panzanella salad of grilled bread and stone fruit.

Despite the ubiquitous status of roasted chicken, it’s incredibly challenging to maintain the delicate equilibrium of perfectly cooked dark meat and white meat. At Crossroads inside the Carolina Inn in Chapel Hill, North Carolina, Executive Chef Brandon Sharp takes out the guesswork with pollo al mattone, laying a thin film of garlic oil in a hot iron skillet, boning then bricking half chickens under a foil-wrapped construction brick.

“I think boning and bricking is the perfect technique for cooking an entree-sized chicken,” Sharp says. “Takes about 12 minutes. It cooks 90 percent of the way on the skin side. We just flip it over, and the meat just needs a little kiss on the other side. Everything cooks to the same juiciness.”

Sharp serves it as a play on the classic French combination of rabbit with mustard, using whipped Yukon Gold potatoes, caramelized Brussels sprouts and a mustard tarragon sauce. “I tend to put more emphasis on a chicken entree because it’s often for people who can’t decide what to order,” he says. “I don’t want it to be a concession. I want it to be stimulating. And I don’t want our guests to have to work with a knife and fork trying to debone a chicken on the plate.”

Chicken is a Good for You (Except When It’s Not)

Delia Champion was betting against the McDonald’s down the street in pork-loving Atlanta when she opened her first Delia’s Chicken Sausage Stand, which serves everything from sliders and
tacos to lasagna and chili made from four propriety chicken sausage blends.

Champion has been a lifesaver for folks who don’t eat pork for health or religious reasons, but her best customers are the ones coming in after the bars close for something a little more indulgent. ’DaBomb is her signature item, a sage-forward breakfast patty served under a fried egg with cheddar and sourcherry cream cheese between a split and griddled Krispy Kreme doughnut. Thought it’s a bestseller, she admits it’s not for everyday eating. “It’s fun, and if you’re young and drunk, it’s memorable,” she says. “It’s like savory French toast.”

Mike Sula is a James Beard award-winning writer who is down with birds that don’t flock together.