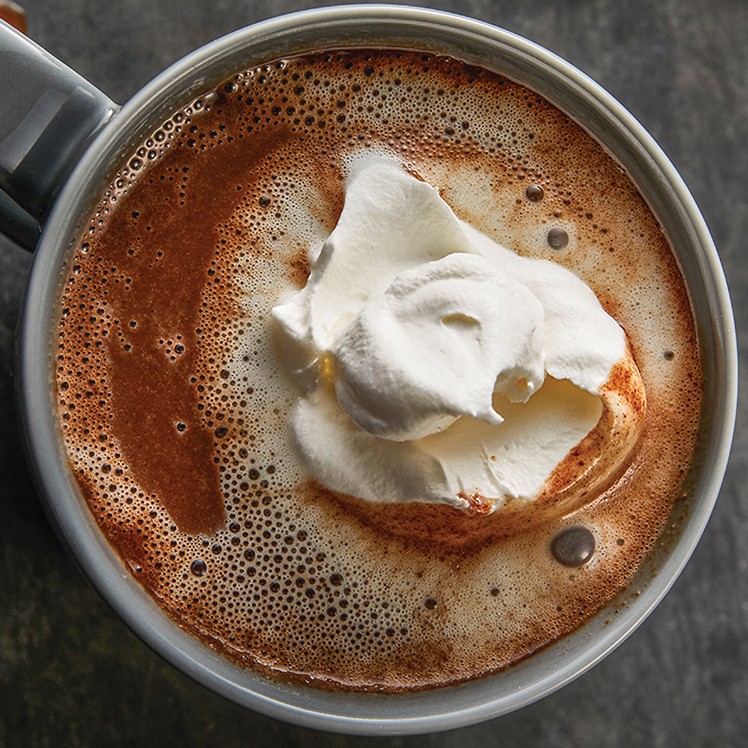 What it is: A creamy dark chocolate drink made with red wine.

Urdaneta, a Basque-inspired tapas restaurant in Portland, Oregon, serves its churros with a rotating variety of hot chocolate. Among them, the red wine drinking chocolate topped with sherry whipped cream has been a hit. Canteras also occasionally tops the chocolate with sherry marshmallows.

Inspiration: When Canteras was growing up, the holiday season was marked by Spanish chocolate (often filled with nuts), which his family paired with whatever red wine was left over after the meal. Canteras returned to the idea for this hot chocolate, adding red wine to a milk-and-cream base, then melting in dark chocolate. The sherry in the whipped cream evokes nuttiness, like hazelnuts or almonds.

Sweetness Index: The key is picking a wine that’s bold but not too acidic or tannic, since the imported Spanish chocolate also carries acidity. Garnacha is a good choice. Canteras also tried white wine and white chocolate, but the high acidity of the wine and the flat richness of the cocoa butter doomed the pairing.

Loyalty Factor: While many customers might show initial reservations about the combination, their response is often resoundingly positive once they try it. “People have certainly come back just to have that,” Canteras says. “The response is surprise and interest all at the same time.”

Combine all ingredients except the chocolate and stir until hot—but not boiling. Turn off heat and stir in chocolate until completely melted and smooth; strain.

Pour into mugs and top with a heaping spoonful of sherry whipped cream. Makes 2 servings.