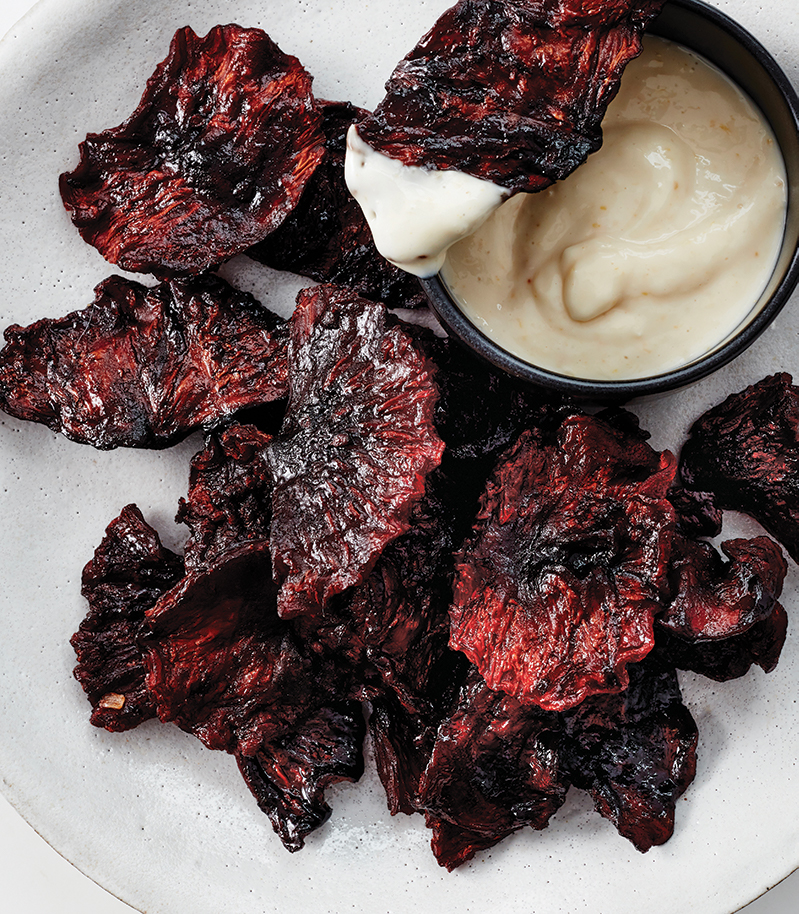 Not long ago, if vegans got roped into a restaurant meal with their carnivore friends, they were stuck ordering side dishes or French fries (assuming they weren’t cooked in tallow).

These days, those opting for a bona fide vegan meal are scaling the top of the food chain. When furniture giant Ikea offers a vegan hot dog that customers praise instead of deridederiding and a plant-based burger is becoming commonplace, it’s easy to see that veganism is the new bacon.

Those identifying as vegan grew to 6% from 1% nationwide from 2014 to 2017, according to research firm GlobalData. While the number is small, plenty of other statistics support the notion that consumers are eating more plant-based foods even if not all of them are self-proclaimed vegans. Data from nonprofit Good Foods Institute reports a 23% increase in sales of plant-based foods last year, making the alternatives to animal-based foods, including meat, cheese, milk and eggs, a $3.7 billion market. 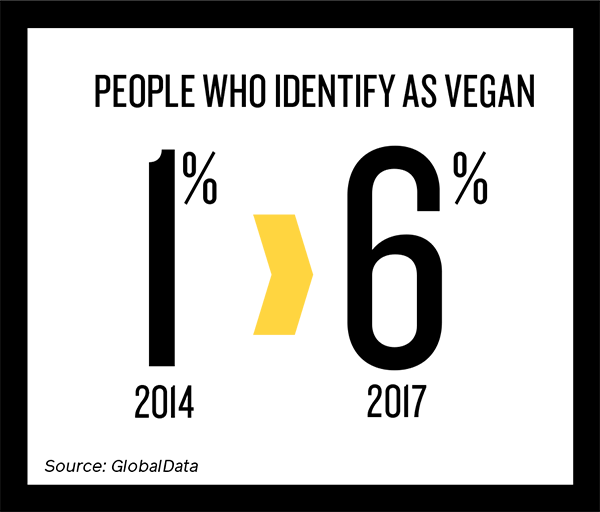 Interest in meatless meal options can be attributed to a variety of factors, from improving health to countering the environmental impact of the meat and seafood industries. While the masses aren’t protesting honey harvesting on behalf of bees, vegan foods are in demand. Customers won’t settle for side dishes as meals or food that looks and tastes like wet cardboard.

While you may be tempted to move meat out of dishes and hope for the best, you’re better off taking a holistic approach. Consider these cardinal commandments to step up your vegan food game.

Take a cue from the The Owlery Restaurant in Bloomington, Indiana, which accommodates dairy-free alternatives, such as cheese, at a moment’s notice. Co-owner Toby Foster and his partner make vegan cheese by puréeing cashews and silken tofu with nutritional yeast. This allows the kitchen to work around dairy for breakfast or lunch, using vegan cheese for eggs and house favorites, like its grilled cheese with spinach and tomato on farm bread.

RULE NO. 2: SPECIALIZE IN A VEGETARIAN SPECIALTY

In most cities, it’s easy to find vegan spots specializing in seasonal American fare. Such a concentration, however, creates opportunities for specialty cuisines. Chef Gregory Brown and his wife, Naijha Wright, found a niche in Baltimore by serving vegan soul food at Land of Kush. To do it right, they experimented with cooking meat substitutes at festivals around the city. “By the time we were ready to open up, people were anticipating us,” he says. Now well established, their biggest sellers are barbecue “rib tips” made from textured vegetable protein as well as a riff on a Charm City favorite: “crab” cakes made from shredded seitan, paprika and Old Bay seasoning, bound with vegan mayo and mustard, then pan-fried. Initially, the cakes were offered only on weekends to test the waters, but their popularity catapulted them onto the daily menu.

RULE NO. 3: STAY UP ON MICRO TRENDS 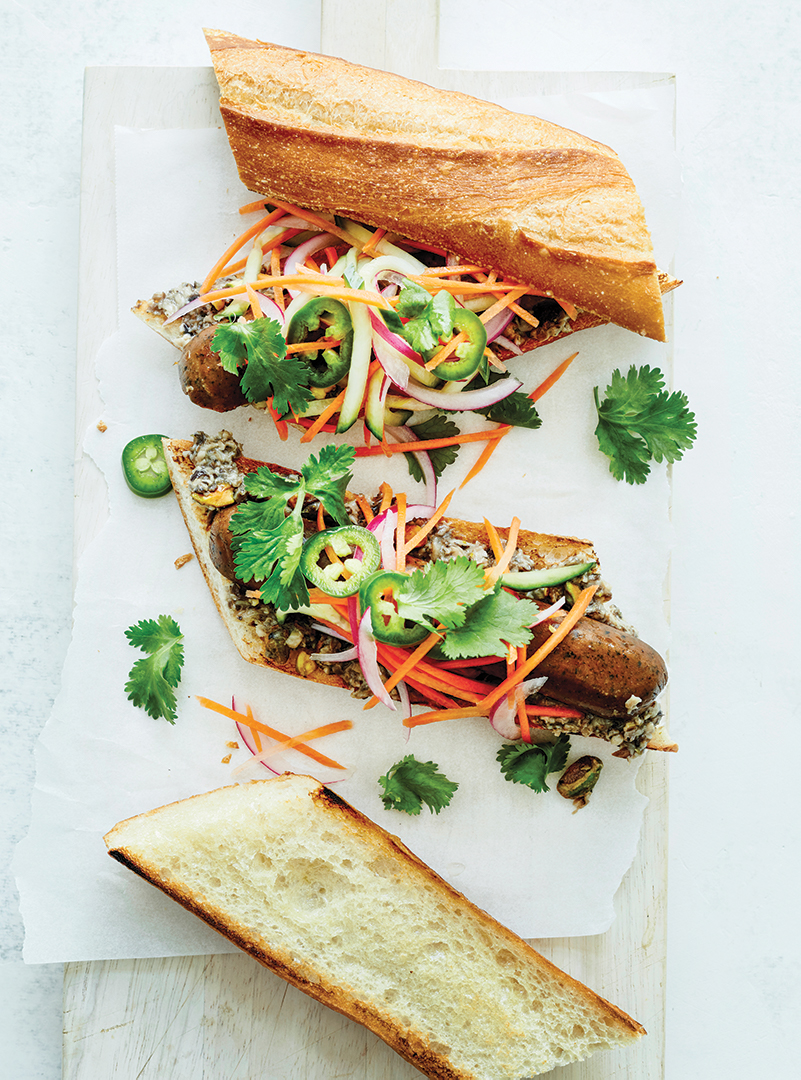 Three years ago when cardiologist Dr. Joel Kahn opened GreenSpace Cafe in Ferndale, Michigan, he was a pioneer, offering upscale vegan dishes like red lentil shorba, with coriander, sumac, cashew lebneh, and chimichurri as well as a forest mushroom gnocchi dish with baby kale, English peas and almond parmesan. But over time he noticed an increase in new customers who seemed baffled by some of the less-familiar ingredients. “The market has changed,” he says. “The blue collar bar down the street has the Impossible Burger. We could see all these first-timers looking at the menu and not really getting it. ‘What’s a jackfruit enchilada?’ We wanted to make it really simple for them.” Last fall, they introduced a “Comfort Corner” menu, with fully veganized interpretations of familiar items like the “Sloppy Joel” sandwich with lentils, kidney beans, chickpeas, red onion, avocado and tomato; and a seitan calzone. These are fast food analogues, but Kahn’s reputation precedes him. “People understand that the difference here is this food is being made special. It’s better quality than you’ll find down the street.”

RULE NO 4: MIRROR THE TRENDS 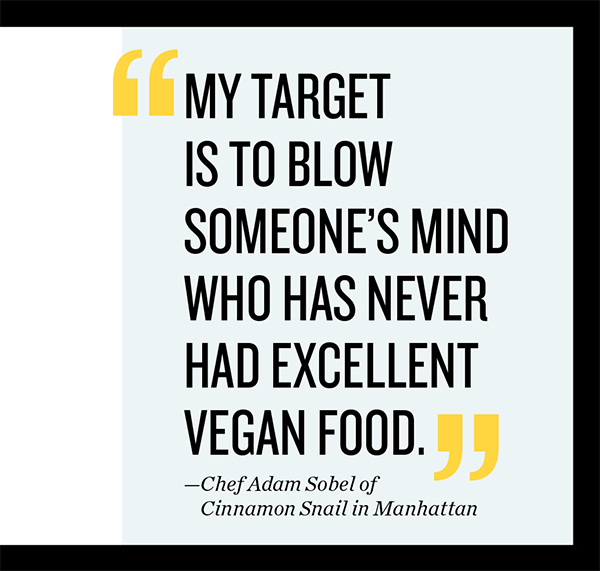 Most diners need an occasional sweet fix. When Chef Adam Sobel started Cinnamon Snail in 2010, he lured non-vegans to his food truck with pastries, believing that once they got hooked on the sweets they’d turn to his innovative meatless meal options. Now with two New York City brick-and-mortar locations and a separate prep kitchen, his doughnuts are positioned as a “gateway drug” to lure in non-vegans. Sobel employs the usual plant-based meat substitutes in complex flavor profiles like a basil grilled tofu banh mi or his gochujang-glazed crispy seitan sandwich, a riff on Korean fried chicken. He dredges a tamari- and sea vegetable-marinated seitan filet in flour, then it goes in soy milk batter before it’s toasted and seasoned in bread crumbs. When it’s fried, it takes on multiple levels of texture. And once it’s glazed in spicy Korean pepper paste, it’s served on a grilled pretzel bun with kimchi, pickled red onions, arugula and sriracha mayo. “I wanted to attract people who otherwise would have some stigma against going into a vegan restaurant,’ he says. “My target is to blow someone’s mind who has never had excellent vegan food.”

Some cooks, like Chef de Cuisine Tim Deasas, eschew meat substitutes, relying on seasonal or local produce instead. A menu of vegetable-focused small plates at New York City’s Avant Garden allows for a better price point and prevents flavor boredom. Diners are encouraged to order four to five dishes each, such as the paella with merguez-marinated king trumpet mushrooms or celery root with a shiitake velouté, topped with a fried and dehydrated mushroom gremolata. The house stock is meat-free, built on whatever vegetables are in the walk-in, a process that saves considerably on already low restaurant food costs.

Food costs remain low at Farm Spirit in Portland, Oregon, which traffics in local and seasonal vegetables. Chef-owner Aaron Adams offers a $89 multicourse tasting, beginning with five snacks (celeriac jerky), multiple savory course (salt-brined celtuce with coriander flowers), a few desserts (carrot ice cream) and a piece of breakfast bread for the next morning. Many sauces and purées are made from fermented scraps to reduce food waste. “We’re able to use the off-ends and make new and interesting preparations we can serve rather than throw in the garbage,” he says. High-end tasting menu formats tend to attract guests not even thinking about veganism. “The majority of our diners are not vegan,” he says. “We have a great number of vegans that come in for special occasions, but more often than not people don’t know we’re vegan.”

Beans and lentils cooked in a flavorful vegetable stock can be used as a component to create center-of-the-plate vegetable or plant-based proteins for hearty entrees. At the Owlery, Foster shoots for a hardy approach with a Moroccan stew, thick with sweet potato, zucchini, carrots and chickpeas. “This is based off of something my mom makes,” says Foster. “It’s probably my favorite soup that we make.” Given the diners’ enthusiastic response, it seems to be theirs as well.

Vegan pioneers Rich Landau and Kate Jacoby of Philadelphia’s fine dining Vedge are giving the masses a taste of their creativity at Wiz Kid, a fast casual restaurant they launched in 2017. Their signature item features a vegan Philly cheesesteak: seiten, mushrooms, onion, pickled peppers and a rutabaga wiz resembling (in body only) the iconic sandwich’s Cheez Whiz.

by Chloe, a New York City-based vegan fast casual restaurant, is expanding beyond Manhattan, London and the East and West coasts. Its seasonal menu of salads, pastas, sandwiches, snacks and breakfast items will spread its focus beyond vegans. “Now we want to target people with health allergies and different tolerances, and start to focus on paleo, nut-free, gluten-free, or carb-free diets,” says Corporate Executive Chef Manuel Trevino.