When the coppa roast is on the menu at NoMI Kitchen in Chicago, Edward Sura’s regulars want to know.

“We have a lot of loyalists that have been coming here who say, ‘Let me know when you get the coppa roast,’” says the chef de cuisine. “So, if we know that we have the coppa roast, we’ll call and let them know.”

Sura leaves the coppa—the circular extension of the loin that goes into the top of the shoulder and the ribs—whole and ties it into a barrel shape before roasting it to medium and slicing. It plates beautifully, he says, but more importantly customers are intrigued by the unfamiliar name.

“People want something different that they haven’t seen before,” he says. “To be able to offer that and give them a story behind it was an easy transition for us, and made it easier to sell and brand it to customers.”

Over the past decade, the meat industry has affixed new names to less-expensive yet highly flavorful secondary cuts, creating a greater awareness for things like porterhouse pork chops, country-style ribs, baseball sirloin and Denver steak. As the restaurant industry struggles to contain rising costs, these trendy cuts offer tremendous potential for operators to profit in more ways than one. 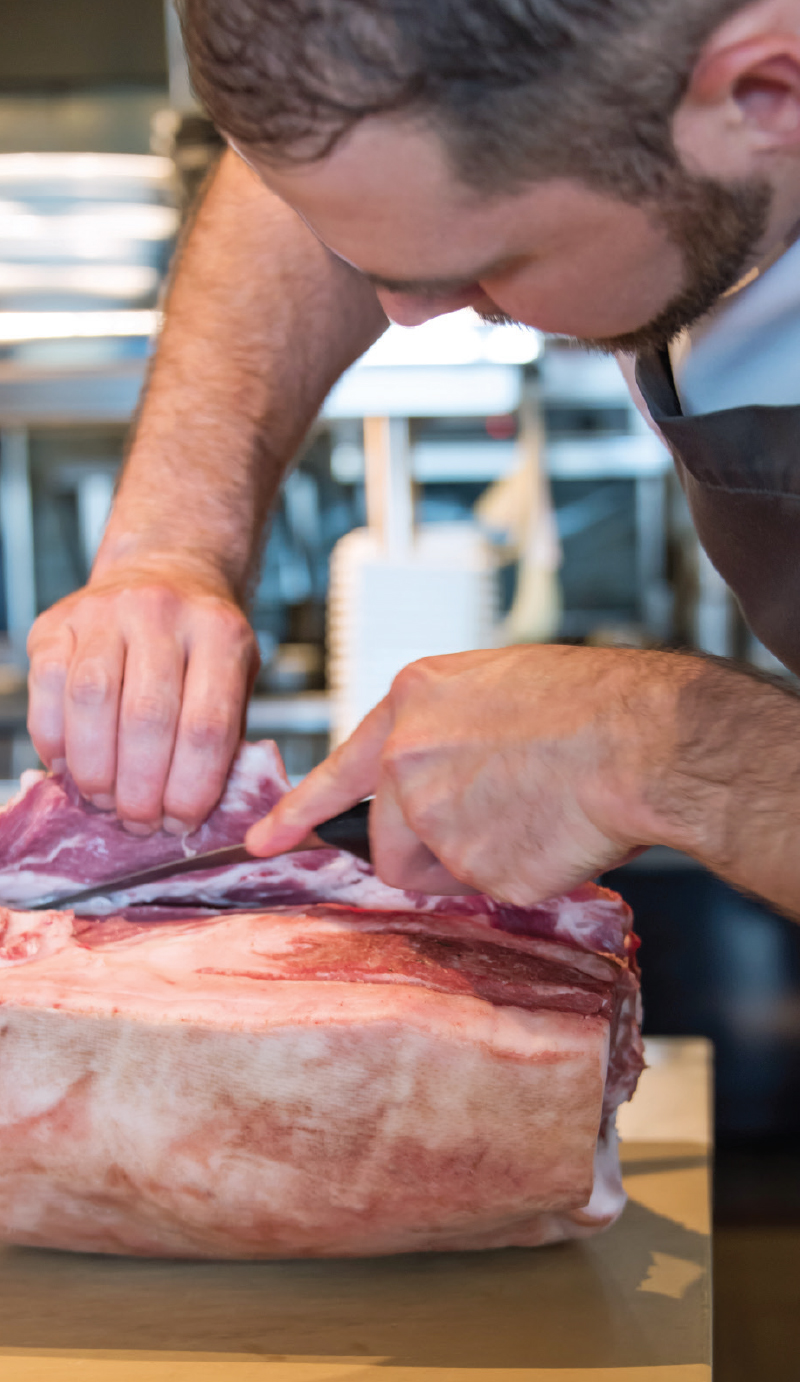 Edward Sura of NoMI, above, butchers a hog for the coppa roast

Pushing Pork
The Cattlemen’s Beef Board and the National Pork Board have spent over a decade working on the reclassification of protein nomenclature, spurring the rise of less-expensive secondary cuts.

In 2002, the National Pork Board began conducting a study of all the muscles in the shoulder and leg, according to Stephen Gerike, the board’s assistant vice president of Channel Marketing. Six years later, as whole animal butchering became increasingly popular in restaurant kitchens, the board decided to standardize language for chops and steaks, eventually unveiling the new names in the North American Meat Institute’s 2014 annual Meat Buyer’s Guide.

By finding uses for specific muscles within larger primal cuts, more value could be created for farmers selling their animals and operators menuing them. The new terminology also helped educate consumers, which encouraged repeat orders and allowed operators to position proteins as premium and affordable offerings.

“If I put an organic applewood grilled pork chop with local mushrooms and ramps on my menu, you have no idea what that pork chop is,” says Gerike. “It could be any loin or rib chop. Whereas if you say a porterhouse chop, they’re familiar with it from the beef cut, which helps take out that trepidation.”

Chefs versed in whole animal butchering, like Chef-owner Justin Carlisle of Ardent in Milwaukee, have been using cuts like boneless and bone-in loins for some time. “The boneless loins are basically a ready-to-go product,” he says. “With circulators, we just drop in seasonings, seal it up, drop it in and walk away for an hour and a half.”

Sura of NoMI is partial to Secreto, a trending Spanish cut that means “secret” but refers to the muscle underneath the tenderloin of the pig in the middle of the sirloin. “It’s super tender and has a
ton of flavor,” he says. “You can grill or sear it like a regular steak. It’s easy to work with and cooks a lot like a loin, but the shape of it is pretty uniform, which works really well for us.” 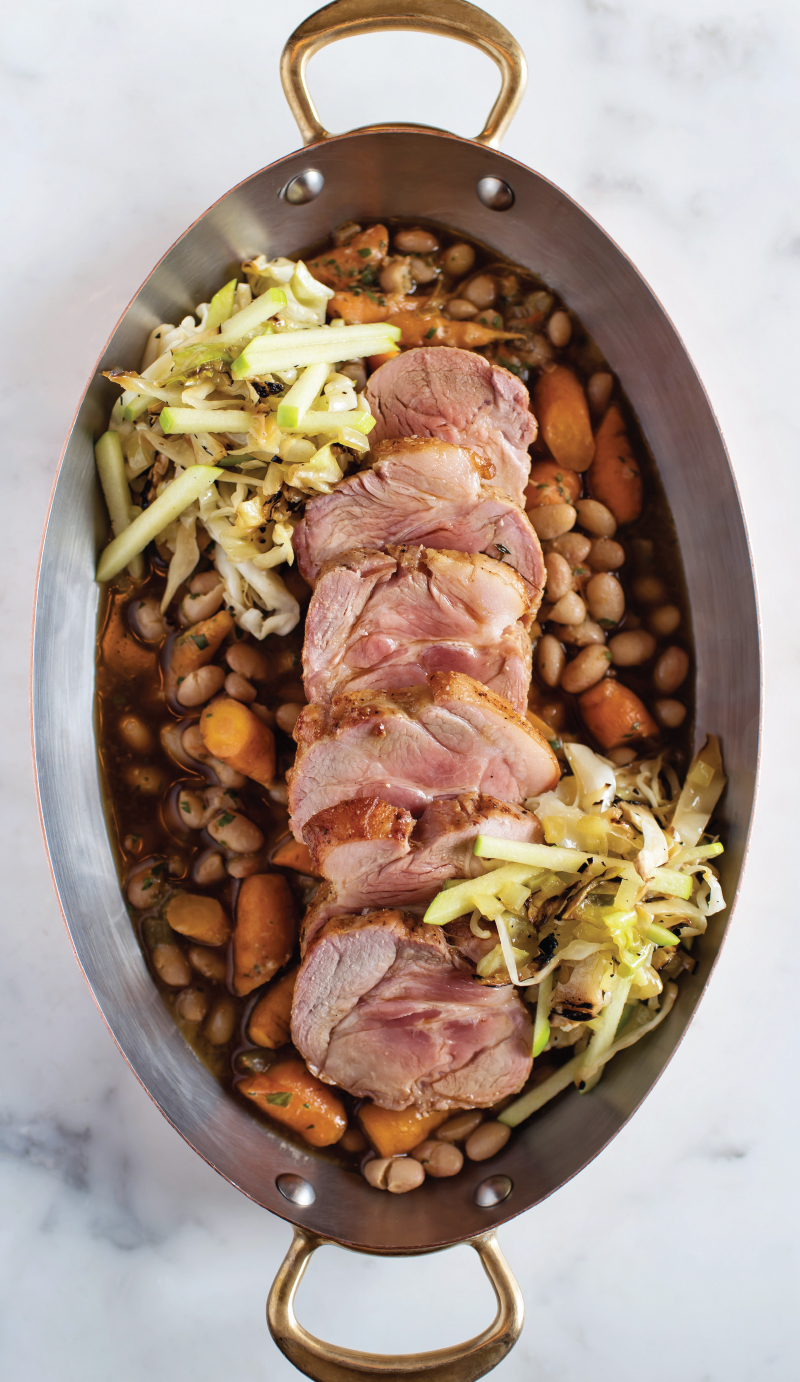 Branded Beef
Denver steak (also known as zabuton, or “cushion” in Japanese) is having a moment of its own. At Butcher & Bee in Nashville, Executive Chef Bryan Lee Weaver consistently offers the cut as his lone beef option, positioning it as an excellent substitute for pricier hanger steak.

Using a marinade made with fermented and burnt scallion, olive oil, sambal, garlic and shallots, he lets the Denver steak rest overnight before grilling and serving it with a side of cucumber noodles with fish sauce and pickled chilies.

“It’s super easy,” he says. “If you mess up a hanger steak with butchering, it’s super chewy. (The Denver) is way easier.”

Executive chef Oliver Ridgeway of Grange Restaurant and Bar in Sacramento became a zabuton fan boy after a vendor introduced him to the cut in 2012. He quickly discovered it worked well in place of short ribs, especially when braised with coffee beans and smoky dried chilies.

“If you do a short rib with a similar application, you’re looking at $34,” Ridgeway says. “I could probably get it (zabuton) on my menu for $26 with minimal cleaning.”

Mentions of bavette, a French term for a flavorful thick-cut flap of beef belly, are up 60 percent over the past four years on U.S. menus according to the foodservice research firm Datassential. Chef-owner Carl Schaubhut of DTB in New Orleans does a simple marinade of herbs, vinegar, garlic and oil, sears the flap, then adds butter, fresh thyme, garlic clove and brown butter.

“It is also called flap meat or flap steak, neither of which are very sexy on a menu, so we use the French term,” Schaubhut says. “We like to use these ‘butcher’ cuts because we can use a higher grade like prime or even wagyu and not have to charge $60.”

Profitable Proteins
Along with piquing diners’ interests, rebranded cuts often yield additional savings. Roger Waysok, executive chef at South Water Kitchen in Chicago, estimates he saves 30 percent by using baseball steak, a thick-cut top sirloin that puffs up when it cooks, which allows him to offset the higher price of working with local farms.

“If I am offering a cut of meat that no one else is, not only does my purveyor have a lot of it, but it gives me a corner on the market,” says Waysok. Because the baseball sirloin boasts an inconsistent shape, Waysok says that chefs have to get creative and utilize the ends and scraps where they can. “Otherwise, it’s very easy to use, grill and cook,” he says.

Off-cuts of pork can also offer jaw-dropping savings. According to Gerike, pork bellies currently cost twice the price of pork loins and three times the price of fresh legs.

“All the muscles in the leg are perfect for grinding, for filling, for making cutlets, milanesa, tonkatsu, schnitzel,” he says, “and they’re almost free. Wholesale, a whole leg is $1.09.”

Weaver of Butcher and Bee has no complaints about the Denver steak he gets for about $2.25 a pound cheaper than a comparable hanger steak. “Getting a similar steak at a quarter of the price is pretty nice,” he says.

A chop isn’t just a chop anymore. Check out these cool cuts making the rounds.