On July 31, 2018, Food Fanatics® Chef Chris Quinn represented US Foods® at the James Beard House, joining a handful of chefs from the Buckeye State to showcase local fare at the Cleveland Rocks culinary celebration. We caught up with Quinn to discuss the one-night event, James Beard’s legacy, the US Foods products featured on the menu, and more.

Let’s start with Chef James Beard. For anyone who might not be familiar, who was he and what was his influence on the culinary industry?

Mr. Beard is heralded as the godfather of American cuisine. He brought French cuisine to America, but with fresh American ingredients and a passion to teach anyone who was willing to listen, he fostered a movement of modernist food. His celebrity grew even in death, when fellow inspirational chef Julia Child started a grassroots effort to support his legacy of education and sharing the love of food.

So what are the objectives of the James Beard Foundation?
Chef Child and Peter Kump, a former Beard student, established the James Beard Foundation to create a scholarship program and other opportunities for chefs, students and food innovators from around the world. They also organized purchase of Beard’s house to create America’s only historical culinary center. The house is a place for chefs to gather, along with the public and members, to celebrate a passion for food.

What is Dinner in the Dark, and how did the James Beard House get involved with the event?
Dinner in the Dark is made up of a group of chefs from Cleveland who wanted to give back to their communities, by coming together in a monthly format to create a dinner with local inspiration. You don’t actually dine in the dark. Instead, you know the restaurant where you are eating, but until that particular evening, you don’t know who is cooking each course. As it’s served, the chef comes out to talk about what they did to create it and how they used the product.

Jeff Jarrett, a US Foods Produce Specialist, CEC, is the founder of Dinner in the Dark, and in his previous life in the business, he was a James Beard Award nominee. His connection with that, as well as his and co-founder Brian Okin’s philanthropy through Dinner in the Dark, caught the attention of the foundation and laid the groundwork for this group to create dinners inside the James Beard House.

What did it mean to you personally to get an invite to cook at the James Beard House? 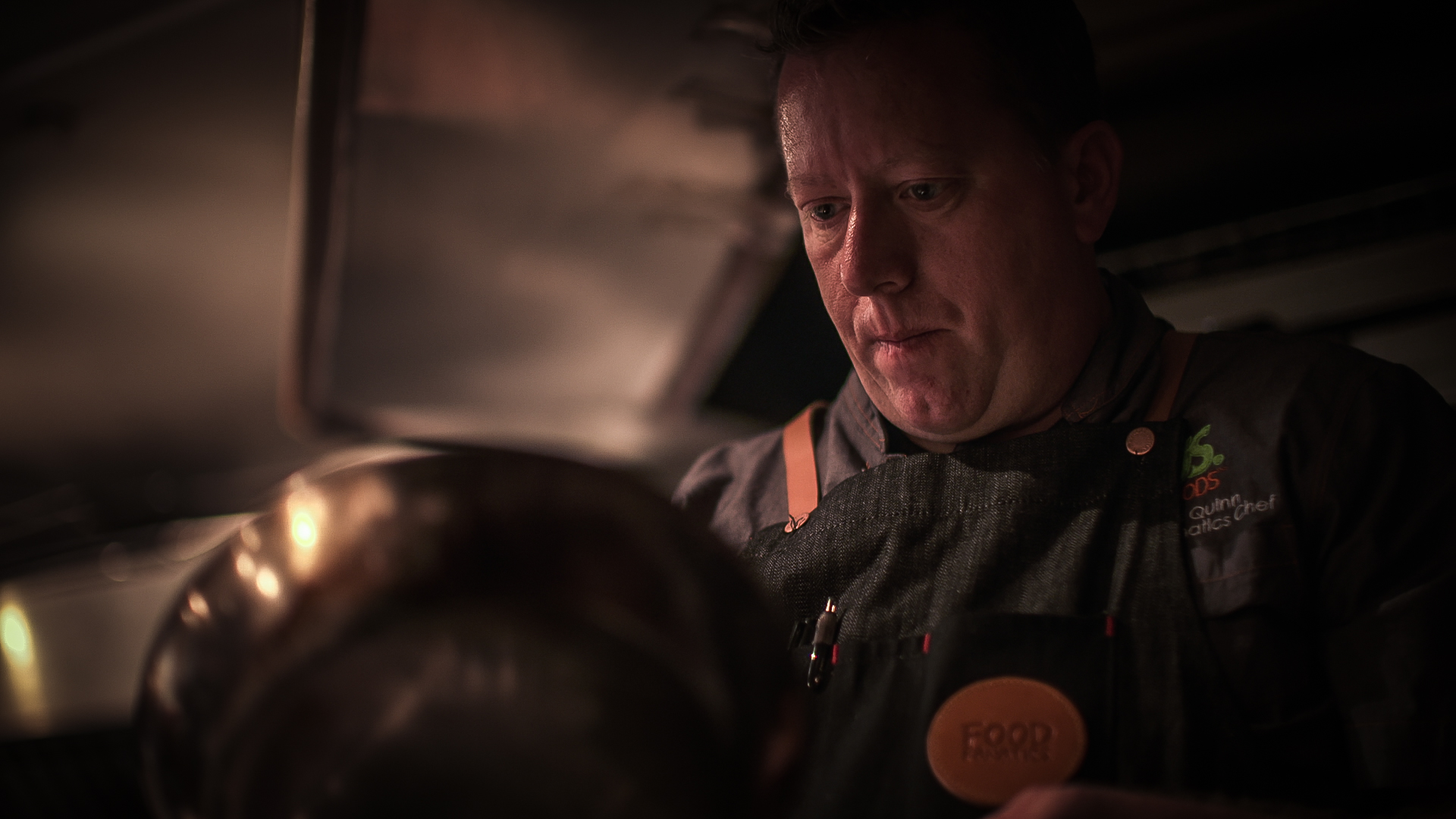 Easy answer, really: Overwhelming excitement – followed by a strong level of nervousness and an undertone of “I hope I don’t screw things up.” To be invited as a chef is like performing at the Oscars. It is the brightest culinary highlight of my career, and I will continue to strive every day to inspire others to reach for the glory and mystique that surrounds 167 West 12th Street in Manhattan.

What foods did you prepare at Cleveland Rocks, and who did you work with to prepare your dishes?
The food was inspired by my time growing up in the Rust Belt, Cleveland and the Northeast Ohio area. I was responsible for three different hors d’oeuvre plates:

The first was a play on French toast and bacon – Brioche French Toast topped with a coffee-infused bacon jam, pickled kumquat and crisp leek straw.

The second was a play on a popular cookie, the Fig Newton. I called it a Pig Newton, utilizing a simple Newton-style cookie dough and infusing it with smoked pork shoulder, Korean BBQ sauce and caramelized balsamic onion jam, topped with a reduced fig jam and Sambuca greens.

The third was a play on S.O.S. (sh*t on a shingle). I grew up the son of a steelworker, so this was an easy execution: shaved ribeye seared in a tarragon cream and served on toasted Everything Bread, topped with a small portion of beef tartar with crispy capers.

We noticed some US Foods Exclusive Brands items on the menu. How were they used? 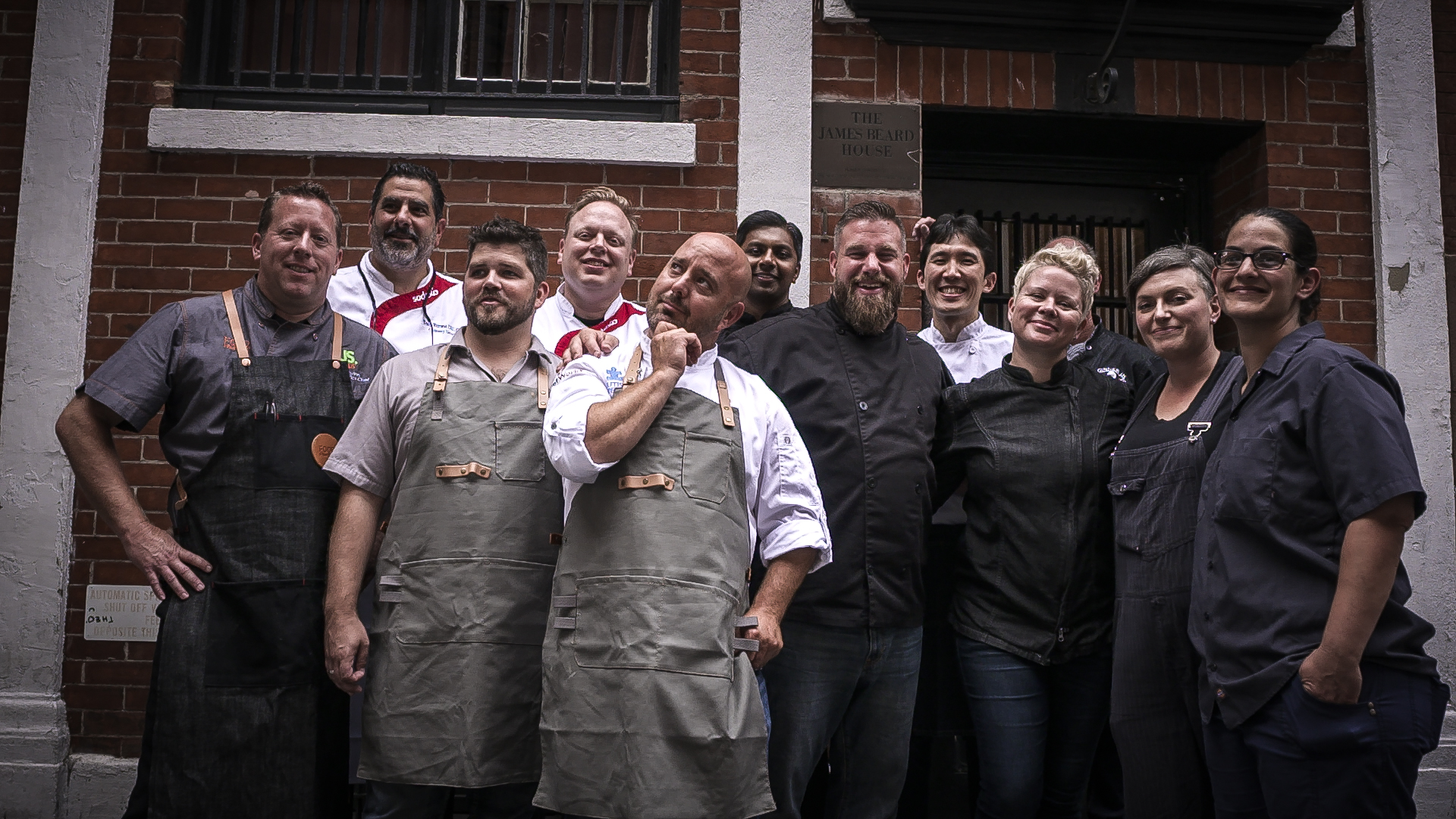 I looked at what I was creating and landed on the proper ingredients, and where they could land. Being part of ScoopTM since its inception – including working early on with product developers and our corporate team – it’s easy to think of the right ingredient for the right application. I incorporated three items into one menu idea – the Pig Newton. I used the Chef’s Line® Whole Pork Butt, Chef’s Line Korean BBQ Sauce and Metro Deli® Caramelized Balsamic Onion Jam for the filling of the Newton, looking for the balance of savory and sweet. I also used the Chef’s Line Non-GMO Everything Wheat Sliced Sandwich Bread as a carrier for the S.O.S. It added the proper depth, as opposed to the traditional white bread I grew up on.