The culinary climate could not be more ideal for vegetarians and vegans. Once mocked by chefs and summarily dismissed by the industry, customers who say no to meat are enjoying newfound respect.

They’ve also made some new friends. Hardcore carnivores and the mainstream are regularly opting out of eating meat at every meal. Whether they want to reduce their carbon footprint or eat healthier, one thing’s for sure: They’re fueling new demand and an opportunity for operators to cash in.

“Protein alternatives have the potential to help operators increase profit margins and also give consumers the opportunity to enjoy lower-cost, tasty and healthy options,” says Joe Garber of food market research firm Datassential. “There are also opportunities for operators to market healthy menu items that consumers would pay more for because they are locally grown, organic, hormone-free and antibiotic-free."

Burgers of Another Kind

Dull, factory-formed, frozen veggie burgers that have long symbolized the cliched joyless hippie diet have given way to innovative blends of seasoned grains, legumes, vegetables and nuts. Quinoa figures into many of the new-style veggie burgers because the seeds pack all the amino acids a body needs to power through the day.

At New York City’s VBurger, a plant-based vegan fast casual, more than half of owner Robert Cox’s customers aren’t vegans. Sales of his classic meatless burger are growing every month. Packed with protein, the burger is seasoned with onion and garlic powder, blended with quinoa and amaranth flour, and served with lettuce, tomato, pickle, onion and mustard Sriracha mayo sauce ($7.50).

Quinoa also shows up at Equinox Restaurant in Washington, D.C. Chef-owner Todd Gray’s daily plant-based lunch special has included a grain-based burger that combines quinoa, onions, garlic, carrot, bay leaf, chili flakes, toasted English walnuts, soy and black garlic shoyu. A slurry of potato starch, xanthan gum and water is brushed over the patties, which are rolled in panko and frozen. At service, the burger is pan-fried, then placed on a piece of multigrain bread with butter lettuce, heirloom tomatoes and herb aioli, alongside hand-cut potato chips and housemade pickles ($19). The food cost is only a quarter of the menu price. “It’s very profitable,” he says.

Quinoa may be the main player in today’s new veggie burgers, but it’s also a key ingredient in a popular variant of another vegetarian standard.

For a Mexican spin on falafel, Mary Sue Milliken and Susan Feniger, co-owners of Border Grill in Los Angeles, mix white and black quinoa with chopped parsley, green onions and Cotija cheese before adding flour and eggs to bind the ingredients. Chilled, then formed into fritters and deep-fried to order, they’re served five to a plate with aji amarillo mayo ($8). (GET THE RECIPE)

Policy Restaurant & Lounge in Washington, D.C., also serves a quinoa fritter but with a roasted corn emulsion. Executive Chef Lonnie Zoeller cooks quinoa in vegetable stock with bay leaves and salt, then processes it with cilantro, mint, scallions and white onions before binding the mixture with eggs and oatmeal flour. Then he slowly blends in fresh housemade mozzarella and Cotija before forming the 1¼-ounce fritters, which are refrigerated before deep-frying. Each order comes with five fritters ($7).

Executive Chef Douglas Alexander at Art and Soul in Washington, D.C., puts a Southern spin on his fritters by mixing chickpeas and black beans with black-eyed peas, onions, cilantro, cayenne, white and black pepper, garlic powder and just enough flour to bind it. Served with two garlic sauces (one with ginger and chilies and the other with yogurt, pureed lemon, mint and parsley), they come five to an order ($13).

Grain bowls have evolved from a dependable hearty breakfast to an all-day option.

At New York City’s Blossom du Jour, the protein bowl is the top seller across all five locations. It brings together a lemon-seasoned protein chicken substitute made from a mixture of soy and wheat, garlic lemon marinated kale, quinoa, black beans, guacamole and tahini dressing.

Guests can add animal protein to the greens and grains bowl at Dallas’ HG Sply Co., but Executive Chef Danyele McPherson thinks they hardly need it. With a mix of baby spinach, chard and kale with wild rice, black and white quinoa, blueberries, dried cranberries, almonds and hemp seeds in a citrus-sherry vinaigrette, it’s already loaded with protein.

In fact, the greens and grains bowl is a relief to McPherson’s food costs, which include higher-priced all-natural meat. “Even though quinoa is a costly ingredient, you use one cup and it turns into four. The food cost is much lower than it is on any sort of quality meat,” she says.

Chef Leonard Hollander of Chicago’s Arbor prefers high-quality local grains as a protein alternative. He’s been working on a brown rice, sorghum and lentil combination, with oat berries cooked to a risottolike consistency. In the winter, he may add Madeira-sauteed shallots and mushrooms, kabocha squash, roasted fennel, Mutsu apples and crushed pecans, with a soft-boiled egg and oil infused with chilies from the restaurant’s garden. (GET THE RECIPE)

“Grains are a very open vessel for utilizing ingredients that you have,” Hollander says.

“You might come in and have a grain bowl on Monday, and it will be different on Wednesday,” he says. “The nature of grains is that they expand when you cook them. When you take your cost margin into account, you get the joy of not calculating out a loss yield. It’s more of a gain yield. And we aren’t cooking them with stock or things that are taking a lot of process or time.”

Scott Winegard, executive chef of Matthew Kenney Cuisine, makes a variety of cheeses from nuts for restaurants in the group, including cashew mozzarella and almond ricotta. Instead of a milk-based variety, the nut cheeses accompany pizzas at Double Zero in New York City.

Almonds are soaked overnight to soften and break down enzymes, making them easier to digest. They’re then processed in a high-speed blender to make a thick almond cream, which is brought up to 90 degrees. Citric acid is added, curdling the cream, which is then strained and refrigerated. The acidic whey is reserved for cooking vegetables or salad dressing, while the curd, once seasoned with lemon zest and salt, is good to go.

Winegard also makes cheeses from cultured and seasoned nut creams for the cheese plate at Plant Food + Wine in Miami and Venice, California. A thick cashew and macadamia cream is inoculated with a probiotic, and then left in a dehydrator set at 85 degrees. After 36 to 42 hours, the mixture is flavored with truffle salt, herbs or peppercorns, poured into ring molds and frozen until set. Removed from the molds, the cheese dehydrates at 115 F for eight to 12 hours, which forms a rind and an interior texture like chevre. The low food cost of making these cheeses is offset by labor.

“A wheel of cheese will cost you a couple of dollars, but it takes you three to four days to make it,” Winegard says. 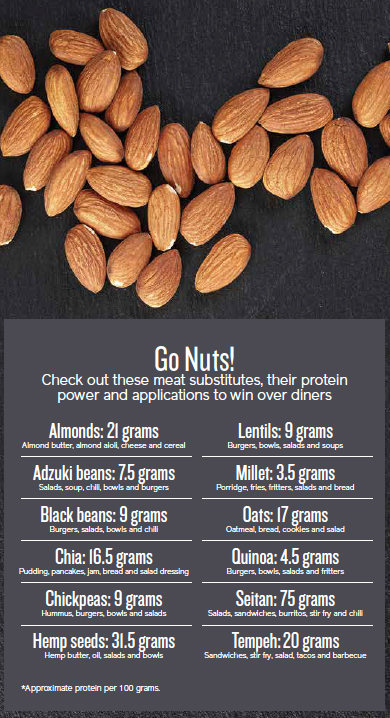 Meaty in other ways:

Protein alternatives are good for the bottom line, generally clocking in around 20 percent. 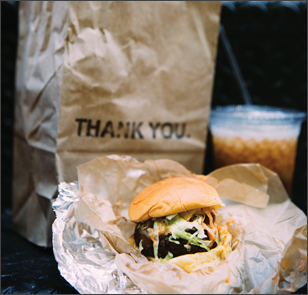 The appeal: Diners who don’t want a meat substitute. Former fine dining Chef Brooks Headley’s fast-casual meatless burger is ranked by critics as one of the best. 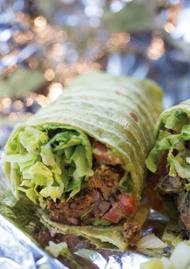