The power of food to make community change

Marcus Samuelsson doesn’t just ascribe to this philosophy – he lives it. Over the past decade as the internationally renowned chef and restaurateur built a veritable culinary empire, he has simultaneously helped empower the neighborhoods that have inspired him since his youth: Harlem, New York.

Along with opening his three destination restaurants in Harlem (Red Rooster, Ginny’s Supper Club, Streetbird Rotisserie), Samuelsson co-produced and launched Harlem EatUp!, a four-day annual festival celebrating the diversity of the Harlem neighborhoods. He’s also board co-chair of Careers Through Culinary Arts Program (C-CAP), which helps disadvantaged youth prepare for restaurant and hospitality careers across the country. Most recently, Samuelsson partnered with US Foods® to create products that will carry the culinary spirit of these iconic neighborhoods across the country.

“Food creates an identity that reflects the community,” Samuelsson says. “Everyone wants to have a local experience.”

After weathering a century of complicated history and socioeconomic factors, Harlem continues to find strength from within. Its history as a cultural hub for African-American music, art, poetry, dance, theater and food speaks for itself. These are neighborhoods that gave rise to landmark institutions such as the Apollo Theater and Dance Theatre of Harlem, as well as swing dancing, jazz and the birth of hip hop.

As an adopted Ethiopian-born, Swedish-raised immigrant still searching for his own identity, Marcus Samuelsson was inspired by the imagery and music produced by Harlem’s African-American community. So, could anyone blame him for being starry-eyed on his first visit to Harlem as a teenager?

“We were in front of the Apollo Theater; it was such a big deal. It was so fascinating to be in this place that I was just trying to understand,” he says. “I started thinking about what’s my purpose and why is it that good food is only in certain communities?”

In 1994, Samuelsson moved to New York to work at Aquavit, the restaurant that would earn him a shining 3-star rating from The New York Times and put his name on the culinary map. While Samuelsson had no problem rising in the downtown fine dining world, he continued to feel a pull toward Harlem.

“Moving to Harlem, understanding that challenge and how I could bridge the gap – all of that came together,” he says. “It was asking why are all the jobs downtown? Why can’t they be in this area? I held up the mirror and was like stop complaining, do something.”

Red Rooster, Samuelsson’s first Harlem concept, was a labor of love years in the making. Launched in 2010, it’s an homage to the soul of Harlem as filtered through his unique Ethiopian and Swedish heritage. The menu is peppered with dishes like chicken and waffles alongside Helga’s meatballs (a nod to his grandmother, who inspired Samuelsson’s love of cooking). Good food can bring anyone into a restaurant, but Marcus Samuelsson wanted to jump-start a community.

“The gospel choir came from Harlem; the artists came from Harlem – that represents the walls (at Red Rooster). The plumber comes from down the block. They look at Red Rooster and see the community, that they can talk to us,” he says. “It feeds your local aspiration but also entrepreneurship.”

Committed to hiring from the neighborhoods, Samuelsson employs an average of 200 employees and volunteers with C-CAP to help prepare at-risk youth for careers in the restaurant and hospitality industry. In addition to creating local jobs, Red Rooster bolsters area foot traffic, pulling in 5,000 customers per week, including those who might not otherwise visit the area. This attention has turned Samuelsson’s restaurant into a community fixture, while increasing interest in local foodways.

Red Rooster added to the culinary landscape, helping reshape conversations surrounding the Harlem food scene. Soon, local farmers markets began to pop up where there were once none, along with piqued interest from restaurateurs who wanted to help shape the growing community. “If you dine somewhere, you’re more likely to walk around the community and engage a community like Harlem,” he says. 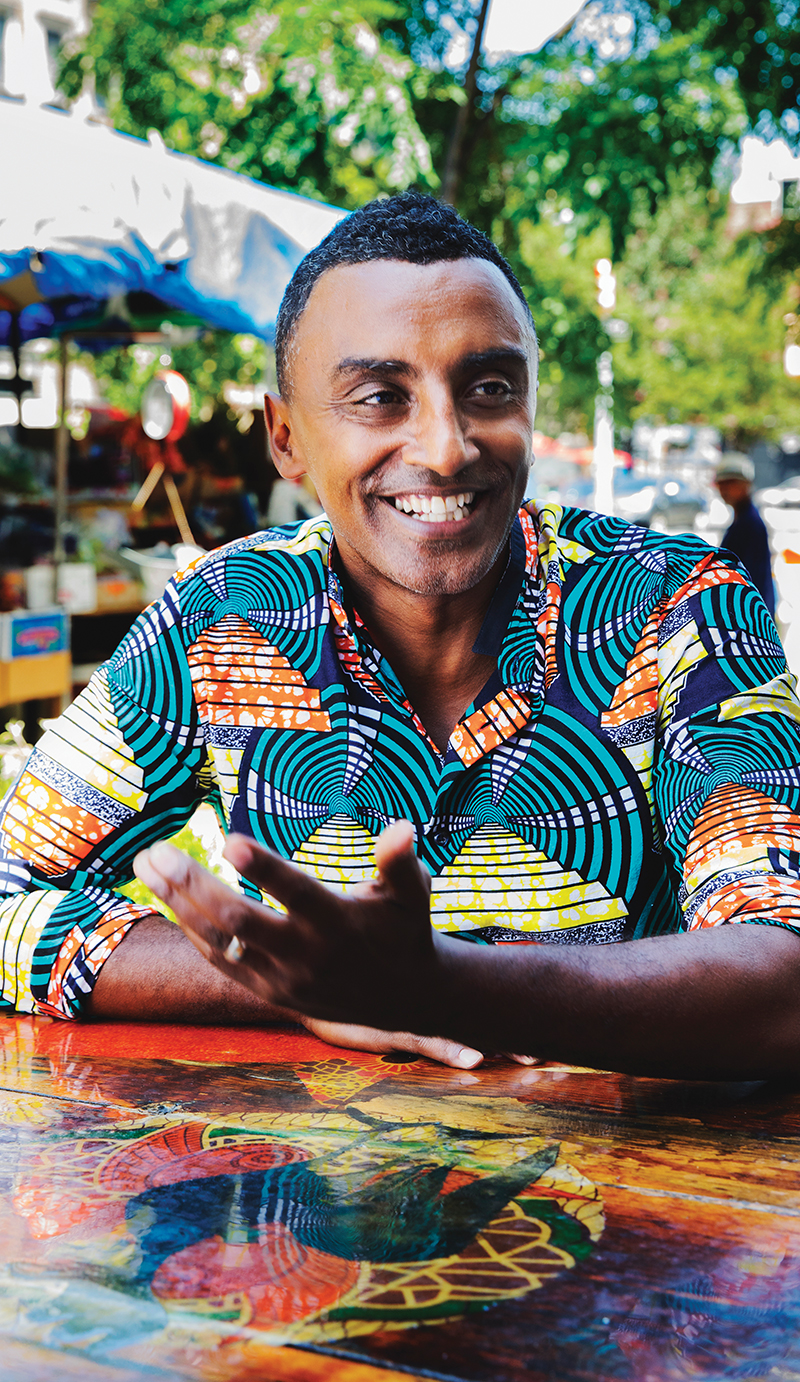 Much like the hospitality industry serves as a tight-knit community beyond the walls of its restaurant, Samuelsson leveraged his brand in hopes of taking the spirit of Harlem to a larger platform.

It began with bringing more New Yorkers and tourists into the fold – people who often viewed the neighborhoods as a mere stop-off point en route to other locales. “(Tourists) would come on a bus with images of iconic places, like the Apollo Theater, then get back on the bus and leave,” he says. “I wanted them to stay longer and have a true experience with food.”

In 2015, he co-produced and curated Harlem EatUp!, a food, art, music and cultural festival. Headlining Harlem chefs including Lance Knowling of Blujeen and Melba Wilson of Melba’s along with celebrity culinarians such as Daniel Boulud and Dominique Crenn created a draw and ultimately turned the event into a highly sought after ticket.

Straight off the success of Red Rooster and Ginny’s Supper Club, he opened the third of his Harlem restaurants, Streetbird Rotisserie, a pop culture-driven rotisserie concept inspired by the neighborhood’s hip hop and street art scene from the late ’70s to ‘90s. The more casual menu and vibe allowed Samuelsson to reach an even wider audience.

Samuelsson also started opening concepts internationally, bringing a taste of Harlem overseas. Marcus’ Bermuda, which opened in 2015 at the Hamilton Princess Hotel in Bermuda, introduced signature dishes, such as his fried yard bird and shrimp and grits, to a wider audience. Red Rooster Shoreditch, a replica of his Harlem outpost, landed in London in the spring of 2017.

Translating an existing concept or menu in a different country might seem like a simple copy and paste job, but Samuelsson takes extra steps to ensure corporate social responsibility while remaining an authentic culinary ambassador. His process starts a few years prior to the opening of his restaurant, perhaps with the launch of a pop-up eatery. It’s all about digging deep and asking a lot of questions. 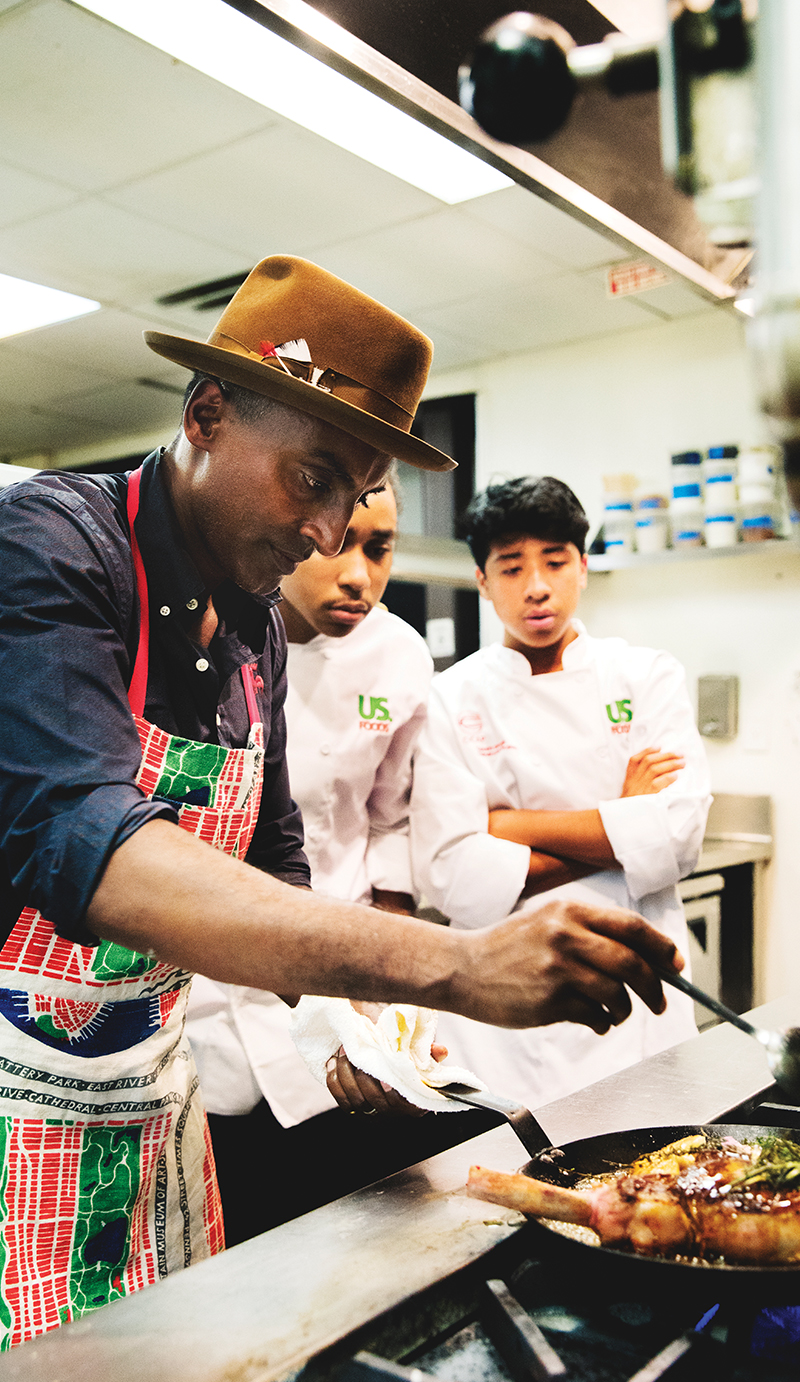 “Who was here before us? Who do we owe this place to? What can we add?” Samuelsson says. “Who are the fishermen? Who are the writers that inspired this place? I challenge my team to do the homework first. Then we say, ‘How can we add to that?’ Add value to the community that you work in.”

His latest venture involves sharing his passion for food with a community that has given so much to him. By working with #USFoods, Samuelsson hopes these products will instill chefs with a sense of curiosity and experimentation.

“Whether it’s the cornbread, spice or Norwegian smoked salmon, all of these things represent comfort for me,” Samuelsson says. “For me, it’s about solutions. I’m very lucky that I can travel the world and share that with your compadres. Coming up with a great product for other chefs, inviting them into a space they might not know about – that’s as important as the customer.”

MARCUS SAMUELSSON AT A GLANCE