Reaching for tongs, wood chips and smokers, pastry chefs are getting a turn on the grill to create caramelized fruit desserts, grilled cakes and smoked chocolates so alluring that diners are easily compelled to stick around for dessert.

According to Technomic’s Ignite menu data, mentions of “grilled” preparations in the dessert category are up 13.9% in the past five years—including a 100% rise in desserts that include ice cream.

Grilling desserts doesn’t require the same amount of time or expertise as most savory preparations. Whether it’s a quick sear on the grill or an infusion of smoke, adding barbecue notes to best-selling desserts allows for a better profit margin without too much additional work.

We've put together a list of some of the best grilled desserts across the nation. Read on for menu ideas and preparation tips.

When it comes to caramelizing the exterior sugars of cakes and pies, there’s nothing an oven can do that a grill can’t do better, says pastry chef Krista Owens of the Loews Ventana Canyon Resort in Tucson, Arizona. 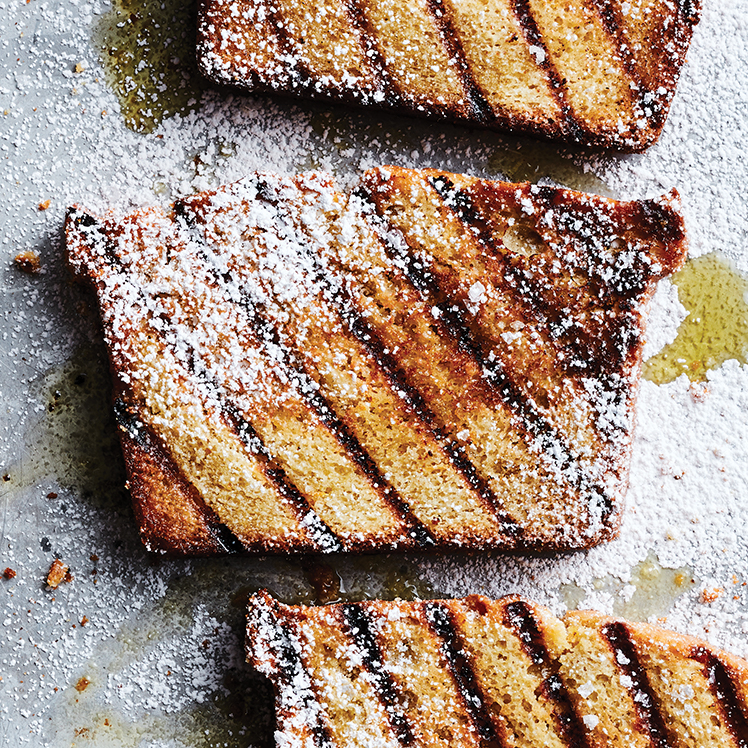 “Grilling and applying smoke to desserts is one of the least expensive ways to transform a traditional dessert into something novel,” says Owens. She smokes her signature apple pie – made with mesquite flour and topped with streusel made from local acorns – with a battery-operated smoke gun, by covering it with a cloche and blowing plumes of mesquite into the enclosure. “You don’t want to overwhelm the pie with smoke,” she says; “just allow the crust to absorb the smoke, so it lingers in the background.”

Grilling cakes is easy, too. For her olive oil cake with orange zest, she slips them on a griddle or skillet over the open flame. It’s important to use a super-dense cake batter. Owens’ olive oil cake is as crumbly as cornbread and brushed with anise- or lavender-infused simple syrup to ensure optimal caramelization. She refrigerates the cake before it hits the grill, quickly sears it, then removes it with a wide spatula.

Kindle Up the Campfire 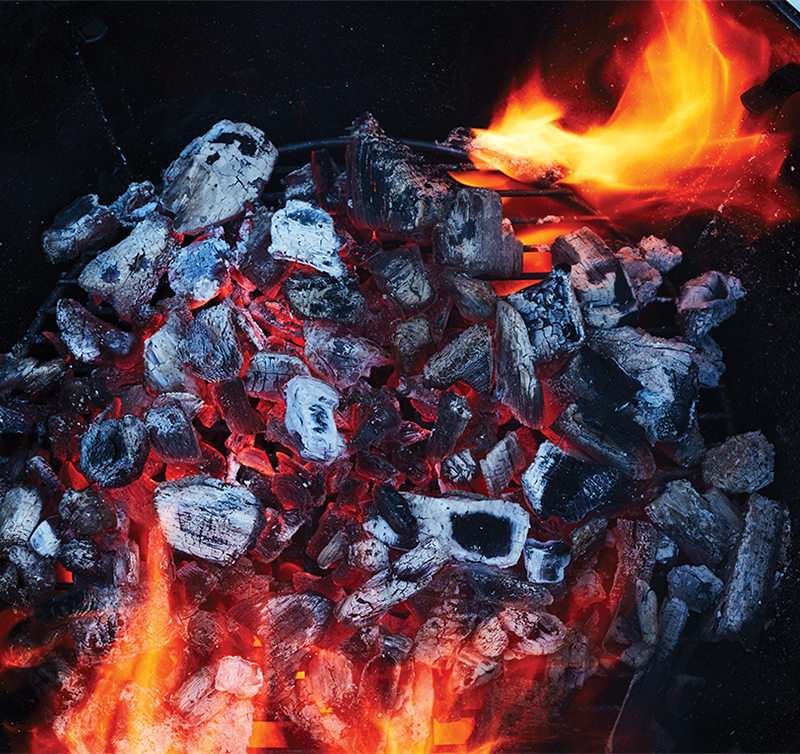 During the summer, Mitch McCamey, owner of Kermit’s Outlaw Kitchen in Tupelo, Mississippi, taps into everyone’s nostalgia for campfires and s’mores using his Argentinian-style wood-fired grill.

McCamey’s kitchen team rolls up chocolate, marshmallows, local honey, bananas and freshly made peanut butter in a foil wrap – like a “hobo pack” – and throws the bundle on the grill, or directly into the coals. “Instead of getting that direct fire, you get more of a slow roll,” says McCamey. “The foil still has some cracks in it, so you don’t get too much smoke. We still want the ingredients to speak for themselves.”

After all those flavors melt and blend together, the dessert is set on an old-school pie pan and topped with local gelato, crushed graham crackers and fresh mint.

“People like to watch a live fire burn,” says McCamey. “There’s something about a smoky dessert that disarms people. It slows them down and keeps them in their chairs.” 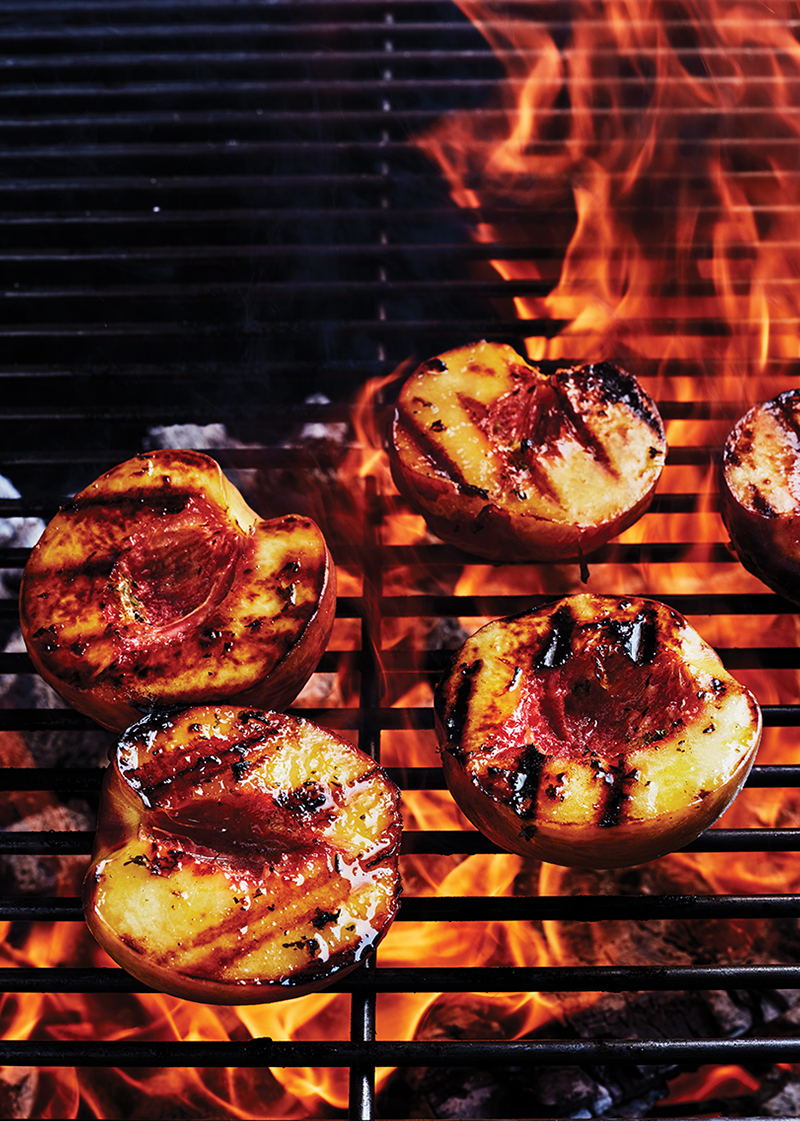 After leaning heavily on a barrel smoker to produce his Appalachian-inspired fare at Whitebird in Chattanooga, Tennessee, Executive Chef Kevin Korman found it could also produce a chocolate cake that highlights the pleasantly bitter qualities of chocolate.

“Diners want to order chocolate desserts,” he says, “but you need to give them something unique, so they say, ‘I need to try that.’”

Finding the right balance of textures and chocolate notes is essential. Although the base of Korman’s black cocoa cake leans on a standard hot-water technique – the addition of boiling water to the batter produces a pound-cake texture that won’t crumble on the grill – Korman also smokes 72% dark chocolate and cocoa for snaps of bitterness.

It’s simple to smoke the cocoa nibs, since they won’t melt, but the 73% chocolate is placed in a perforated pan – then set atop another pan lined with ice – and smoked for 20 minutes until it sweats. “It’s a subtle flavor,” he says, “not like heavy bacon, but more like the scent and flavor of a campfire.”

Then come repeated layers of chocolate flavors. The cake is placed over a smear of milk chocolate mousse. Smoked cocoa nibs are folded at the last minute into ice cream, so they don’t crumble. And finally, a bitter crumble – made with milk, coffee and smoked cocoa nibs – is sprinkled over the top like bits of black forest streusel.

“I love a dessert that has a balance of flavors, texture and temperatures,” says Korman. “When you have both a warm and a cold element, you’re guaranteed success.” 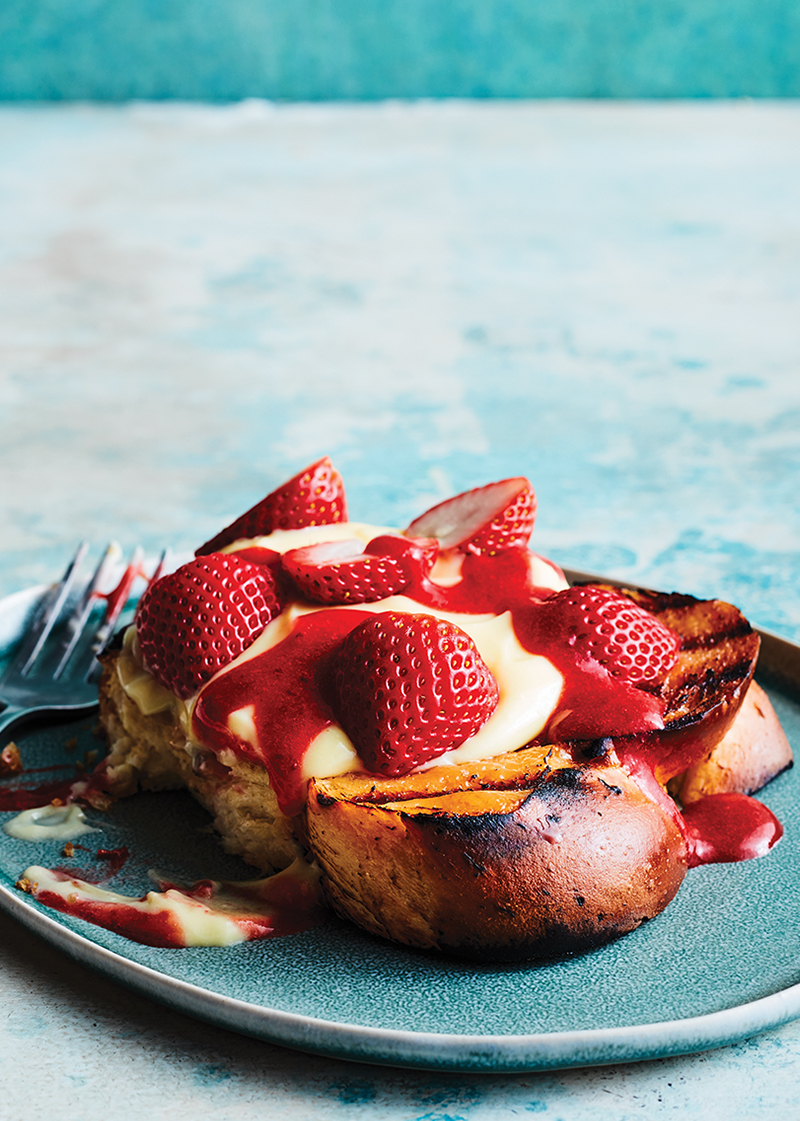 Carrie Blease, co-owner and chef of Lord Stanley in San Francisco, loves post-dinner cheese courses, but struggled to sell them until she employed charcoal.

Blease’s dessert-style potato dauphine draws on diners’ unyielding love for mashed potatoes by smoking a traditional potato purée – “everyone already knows how to use the grill anyway,” she says – then piping it into a choux-inspired nest shape. At service, it’s fried golden brown, before some goat cheese mousse is also piped inside, along with blueberries and a grating of an aged goat gouda.

“The potato gives it a gooey interior – almost like a mashed potato consistency, instead of your typical baked choux,” says Blease. “People tend to compare it to a funnel cake – crispy, yet lightly sweet.” 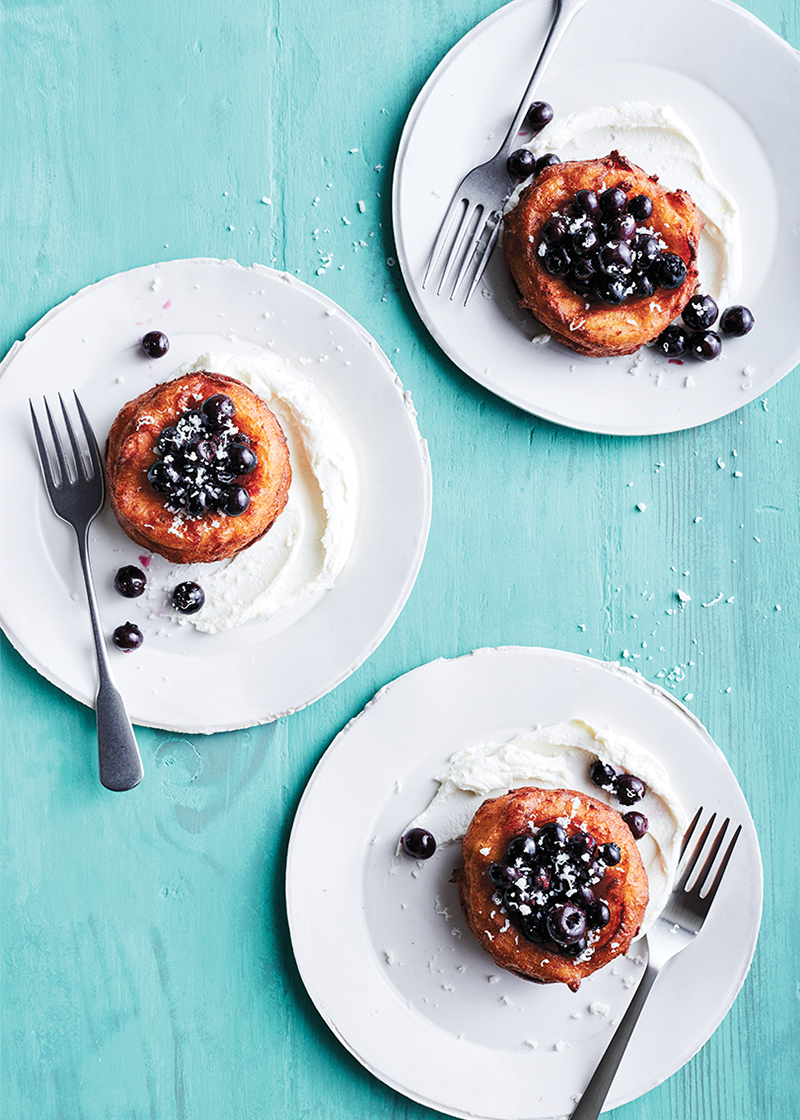 Coconut: At Etaru, a robatayaki concept in Fort Lauderdale and Hallandale Beach, Florida, Chef Luca Spiga inserts charcoal embers from his robata grill into a fresh batch of coconut milk. The intense heat turns it bittersweet, before it’s folded into an eggy meringue and added back into a blackened coconut shell and moated by a ruby red passionfruit sauce.

Pineapple: At Cantina Laredo in Chicago, Chef Daniel Espinoza salts and grills pineapple to create a smoky variation on tamales canarios. The smoked juice and pineapple bits are added to the masa, rolled in a grilled banana leaf, foiled up and steamed for 45 minutes. The remaining grilled pineapple is diced with bits of the banana leaf and walnuts to make a compote, which is topped with cold-smoked, honey-whipped goat cheese.

Peaches: Sometimes the fruit should speak for itself. Christian Graves of Citizen Rail in Denver marinates his peaches overnight with honey, thyme, bourbon and lemon zest. At service, they’re grilled and topped with vanilla ice cream and granola.

Citrus: A boozy marinade helps unlock the innate sugars with slightly bitter or acidic fruit. At Masters Kitchen and Cocktail, Chef Andre Clark II makes a sweet variation on a smoked citrus parfait by grilling peel-on grapefruit and oranges, then dressing them with reposado tequila and flambéing them. After a dip in agave syrup they’re flambéed again, then topped with pomegranate seeds and micro cilantro.