Diners have come to expect a scoop in a bowl when ordering rice. And while there’s no shame in serving the plain side, it’s limiting to think of rice solely as a starch.

As a familiar—and gluten-free—ingredient, rice already has a large fan base. By tapping into preparations from such places as Indonesia and Africa, chefs are elevating the popular staple to a starring position on the plate. 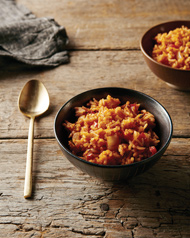 Given the importance of rice on a Creole table, most meals at Emeril’s Delmonico include some form of it. Scanio came across jollof, a West African dish, after digging into the origins of Creole food traditions. The dish is likely the precursor of jambalaya made in the Creole style with tomatoes, he says.

Scanio sweats onions and bell peppers with garlic and herbs. After mixing in and caramelizing tomato paste and jasmine rice, he adds the liquid—a blend of tomato puree and water. Smoked paprika and cayenne add a bit of smoke and heat, mimicking the flavor of rice cooked over an open fire. 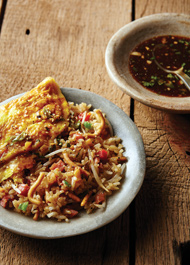 When Chinese immigrants introduced Peruvians to fried rice, native South Americans pronounced its Chinese name as chaufa. It has since become a popular comfort food made with meat or seafood. Delgado combines both—braised pork shoulder and grilled shrimp—in his version. He uses Japanese rice, which is cooked the day before with a little garlic oil.

While typical chaufa is made by cooking the eggs in the rice, Delgado prepares them separately—in a shrimp omelet that’s served over the rice with a spicy ginger-garlic sauce. He also borrows a page from the Korean bibimbap playbook, serving the dish in a hot stone bowl so the kernels crisp on the bottom. 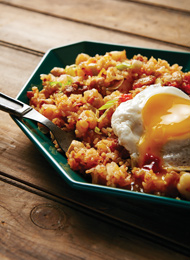 Seasoned with sambal and fermented shrimp paste, Indonesian fried rice stands out from other renditions with its assertive spicy and funky flavors.

To complement the seasonings, Trees includes trimmings from pork belly braised in Indonesian soy sauce and sambal as well as caramelized bits of grilled chicken and chunks of Indonesian soy sauce and sambal-seasoned shrimp. For the grain, Trees cooks jasmine rice in a rice cooker and slacks it out onto sheet pans. This prevents the kernels from sticking and helps the rice puff as it’s stir-fried. “The most important part of fried rice is the rice itself,” Trees says. 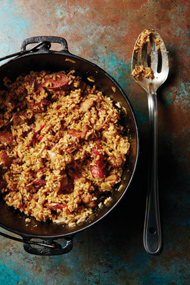 Growing up in Louisiana, Simoneaux ate rice like Americans in other parts of the country ate potatoes—with nearly every meal. When re-creating homestyle jambalaya in San Francisco, he made the switch to organic brown rice. “It’s more forgiving,” he says, and its nutty flavor complements dishes containing roux, like gumbo.

Simoneaux makes other modifications to translate the dish to a restaurant. He cooks the grain in a rice cooker using chicken stock simmered with pork shoulder, duck gizzards and smoked duck necks. The pork from the stock is included in the rice along with andouille sausage.

After fielding numerous requests for gluten-free and vegetarian noodle options, Yagihashi took a cue from modern restaurants in Japan and drafted a vegetarian dish with Korean rice cakes, called mochi in Japan.

The chewy rice cakes, made from pounding glutinous rice into a paste, come in several sizes. Yagihashi buys thick, 5-inch-long mochi sticks and slices them into 1-inch pieces. He simmers the rice cakes in water to soften them, while sauteeing Japanese mushrooms in olive oil with shallots, garlic and vegetables such as sliced red peppers and bok choy. The mochi are added to the pan and simmered with a sweet chili-soy sauce and vegetable stock. Yagihashi finishes the dish with Parmesan, as a nod to the modern Japanese knack for pairing Parmesan with soy, along with butter.

“By reducing the broth, the flavor gets into mochi,” he says.