Beef tartare was once a dish to be feared; adventurous feasters dared each other to order the rare appetizer. Today, it’s one of the most popular dishes on menus across America.

But beef isn’t the only ingredient chopped and seasoned for tartare. Chefs are experimenting with alternate proteins like salmon, venison and offal—even substituting vegetables. Different ingredients and techniques are spiked with texture enhancers like deep-fried quinoa and cracked bulgur for that extra pop.

Working with raw ingredients requires a stronger eye toward food safety, but adding tartare to the menu can be a boon to the kitchen. The dish is quick to prepare, uses smaller portions of meat and leaves room for creativity. Here are five ways to go raw. 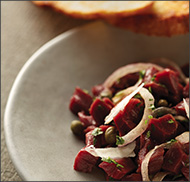 Why it’s different: Spence uses beef at Amis, but not in the traditional way. “Beef heart is a great fit for tartare,” he says. “It’s very lean—raw beef fat isn’t really something you’d want to eat. Working muscles are going to be more flavorful. (And) there is not a lot of connective tissue, allowing for total utilization.”

Traditional garnishes receive slight twists. Capers are fried instead of served raw. Red onions, instead of being chopped and folded in, are pickled.

“Raw heart is like a challenge,” Spence says. “It’s guaranteed to spark some kind of emotion, whether it’s good or bad. Once you try it and realize how tasty it is, heart isn’t that challenging at all.”

Tartare is a cost-effective menu item at Amis because a little bit goes a long way. Restaurants can charge half the price of a steak for a single ounce of meat, and diners still feel they get a good value, he says. Plus, “it’s a dish you can assemble quickly so that makes it a bit easier,” Spence says.  (GET THE RECIPE) 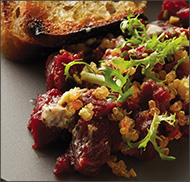 Why it’s different: Van Camp uses farmed venison, which is slightly less gamey. Standard tartare ingredients like mustard, capers and shallots are topped with smoked egg yolks cured in salt and grated finely over the top using a microplane. Instead of breadcrumbs, he spikes the dish with deep-fried quinoa. “It’s a great little textural thing,” he says.

Unfortunately, the tartare is not a high-margin dish, especially when it’s accompanied by big pieces of rustic bread made from house-milled flour. But the dish so popular, it’s not coming off the menu any time soon, Van Camp says. (GET THE RECIPE) 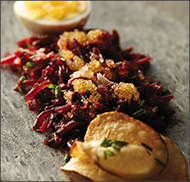 Why it’s different: It’s meatless. While working on a crab cake with smoked sable, Sichel created a concoction of grated beets and horseradish as a condiment.

“The owners liked it so much that they thought it was worth a whole dish,” Sichel says. When plated, it looks exactly like beef tartare, so they decided to run with it.

Marinated, salt-roasted beets are grated and served like beef tartare with olive oil, chives, shallots and hard-cooked egg. To give it that borscht twist, it’s served with smoked trout caviar, a housemade sour cream and onion potato chip. The innovative presentation even draws in the veggie haters. “Most of the time when there are beets on a menu, they’re in a salad with goat cheese—this is so different,” he says. (GET THE RECIPE) 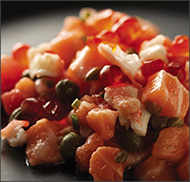 Why it’s different: Tuna tartare has gotten a bit stale, which is why Ferraro has moved on to another fish: salmon. After sampling seafood throughout Alaska, he settled on a version that’s like a state advertisement on a plate, featuring salmon and king crab.

“I chose to prepare the Alaskan king salmon as a tartare because it’s rich, and fresh flavor is showcased much better when served raw,” Ferraro says. Salmon tartare serves as a base, topped with crab and salmon roe. Accouterments lean traditional (capers, shallots, chives), but slow-roasted tomatoes add contrast. (GET THE RECIPE) 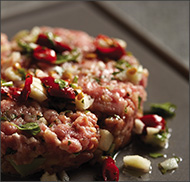 Why it’s different: Lamb is the main ingredient. Zahav’s tartare is a take on kibbe naya, a mix of raw ground lamb and spices found throughout the Middle East.

Hildebrand freshly grinds whole saddles of lamb, including the spine, belly loin and tenderloin. The meat is peppered with seasonal touches such as small-diced apples, pickled shallots with brown sumac, parsley and mint. Bloomed bulgur wheat and ground walnuts are added for texture. It’s served with a traditional Yemenite condiment called skhug made up as a spicy, raw blend of chilies, garlic, vinegar, salt and parsley.

He thinks the prix-fixe small plate menu structure has a lot to do with diners’ willingness to eat raw lamb. “Some people would be intimidated by having a plate of raw lamb in front of them. But since they’re ordering five to six plates on the tasting menu, it’s easier,” says Hildebrand.

Whole lamb saddles are pricier investments that require more work, but he thinks it’s worth it. “It tastes better and it’s easier to enjoy.”  (GET THE RECIPE)

Anthony Todd is a practicing lawyer and freelance food writer.