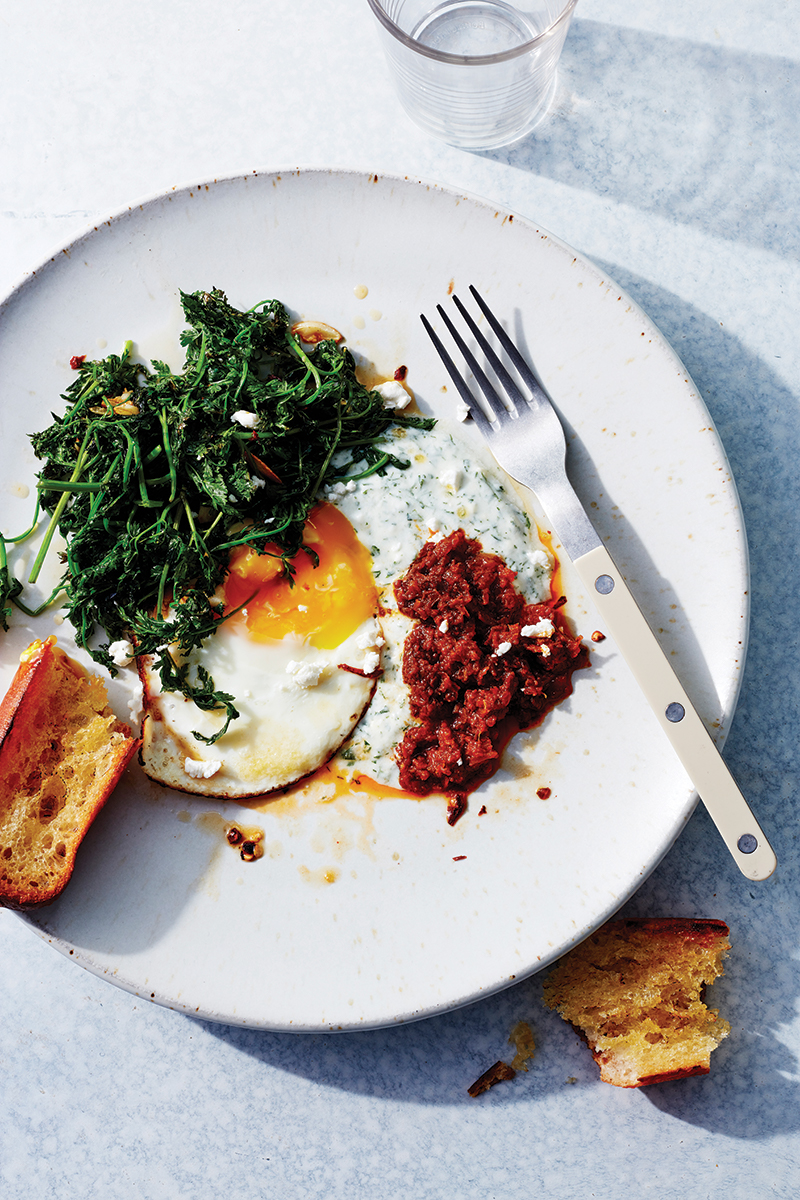 If you’re searching
for inexpensive, full-bodied, versatile ingredients that will separate your menu from the seasonal masses, just look at your feet.

There, you will find that the pesky weeds overriding your garden, the forgotten greens fringing the sides of roads and the resilient leaves that break — wild and defiant — through the cracks of urban sidewalks have real culinary potential. They are prevalent in certain enclaves and ethnic cuisines but haven’t made a significant impact in American concepts until recently.

Edible weeds or foraged and wild and foraged greens — from sassafras and purslane to milkweed and dandelion — are becoming walk-in staples much like ramps and fiddlehead ferns. They’re ultra local, cost-effective, considered healthy and align with eco-friendly philosophies.

Quick and easy prep can elevate a variety of dishes, such as the versatile wild green verde Chef Greg Proechel makes at Ferris in New York or the shot of henbit — which tastes like sweet carrot tops — that Sous Chef Tim Welch sprinkles across his menu at Emmer & Rye in Austin, Texas.

Says Chef-owner Davin Waite of the Wrench & Rodent Seabasstropub, The Whet Noodle and Pickled Ginger Catering in Oceanside, California, “Adding these greens to your menu is like going from a small box of crayons to working with a box of 120.”

“Some are subtle; some are big. But they always give you a larger arsenal to find that perfect bite we’re all looking for,” Waite says. Spring is waiting. It’s time to start stocking up. 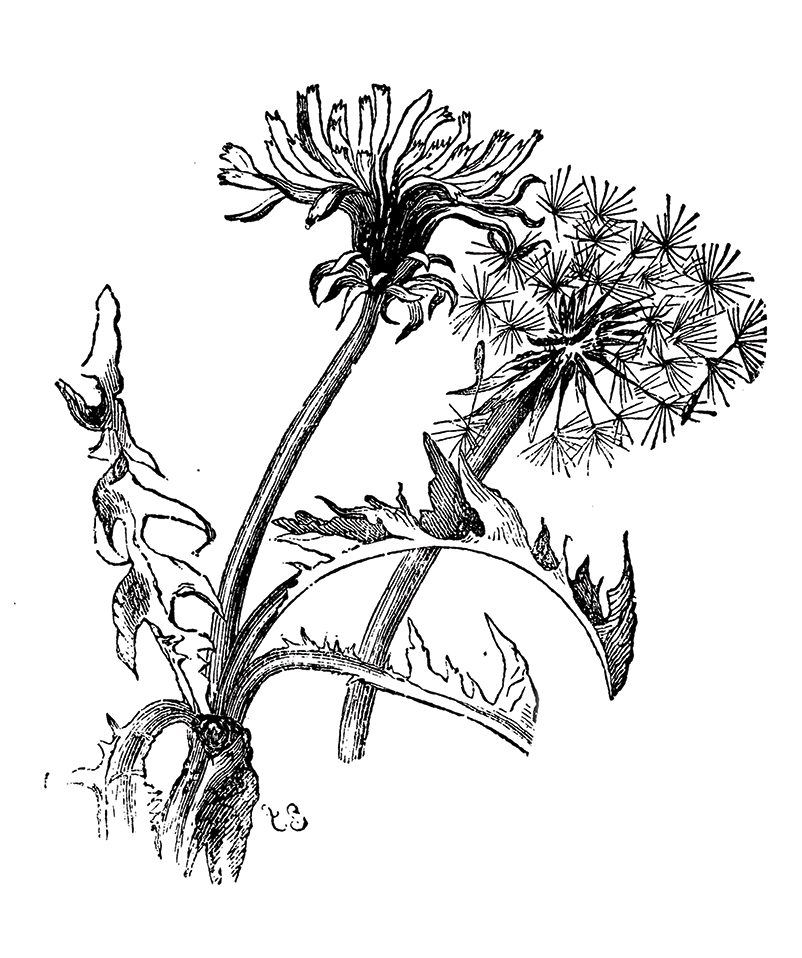 On the precipice of going mainstream, dandelions are abundant, healthy (good sources of Vitamin A and C) and inexpensive, but Chef Davin Waite also appreciates the green’s slight bitterness for counteracting rich flavors and proteins.

BEST PREP: “If you’re cooking something sweet and you need to bring it back down in the other direction, dandelions are perfect,” says Waite. Not only do they soak up animal fat better than collard greens, they work well as the foundation for vegetable entrees. Waite sautés them with sweet onions, then adds honey and tamarind glaze for a gluten-free dish that’s as rich as any center of the plate protein.

INSIDER TIP: Pick dandelion greens early, before they bake and turn bitter in the summer sun. Throw them on the grill, like a peach, to caramelize any excess sugars or fire them up in a pan and deglaze with a sweet cooking wine. 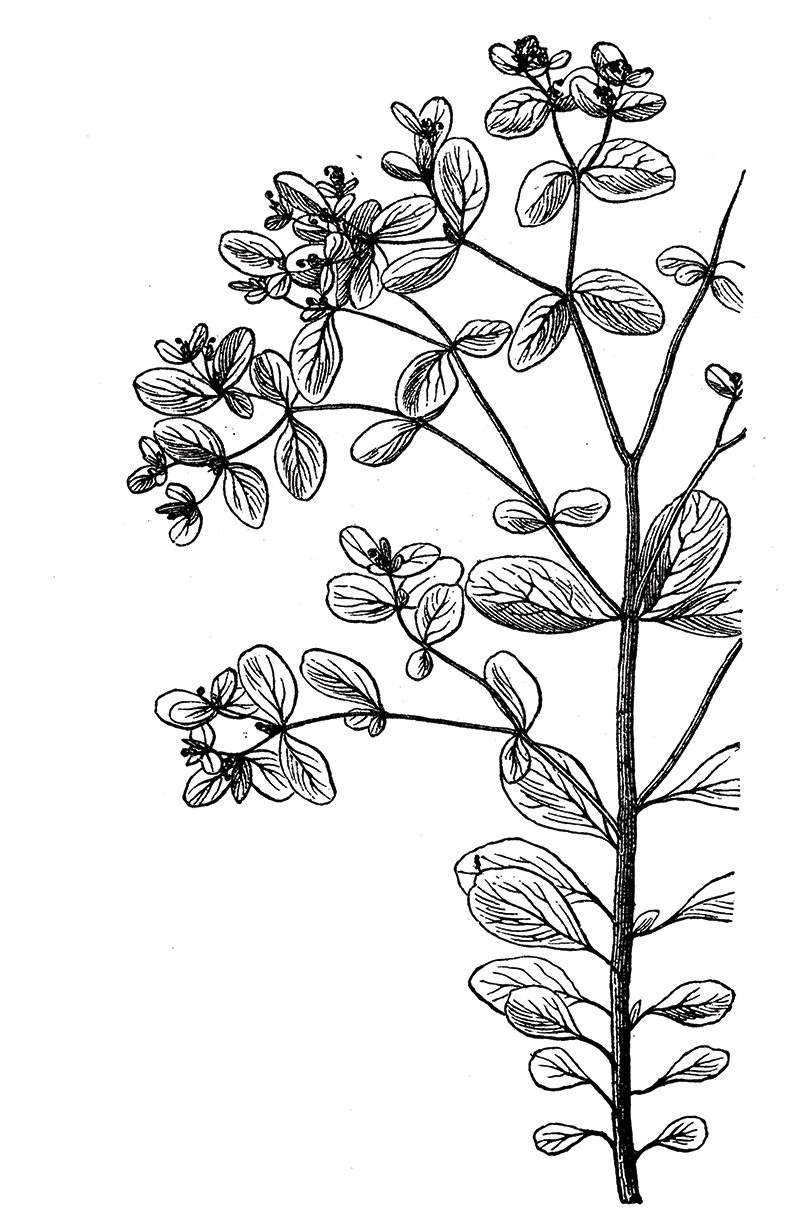 Chefs like Brandon Carter and forager Josh Heaton, co-owners of Farm in Bluffton, South Carolina, have discovered what Creole cooks have long known: powder made from fresh sassafras tastes as bright and refreshing as a woodsy spearmint.

BEST PREP: The difference between dried sassafras powder and one made from fresh sassafras, says Carter, is “night and day.” To make his own, Carter dries the leaves in a low-heat oven or above a wood grill. Once they’re almost brittle, the leaves are ground and added to a variety of dishes, such as the fried oyster gumbo.

INSIDER TIP: Don’t let the root of the sassafras go to waste. At Farm, they’re combined with Everclear, cane sugar and more than a dozen botanicals before the ingredients are infused sous vide-style. The root serves as a garnish for the house’s Old Fashioned. “Sassafras can be almost pleasantly medicinal,” says Heaton. “You can smell the flavor almost more than you can taste it, which gives you plenty of options.” 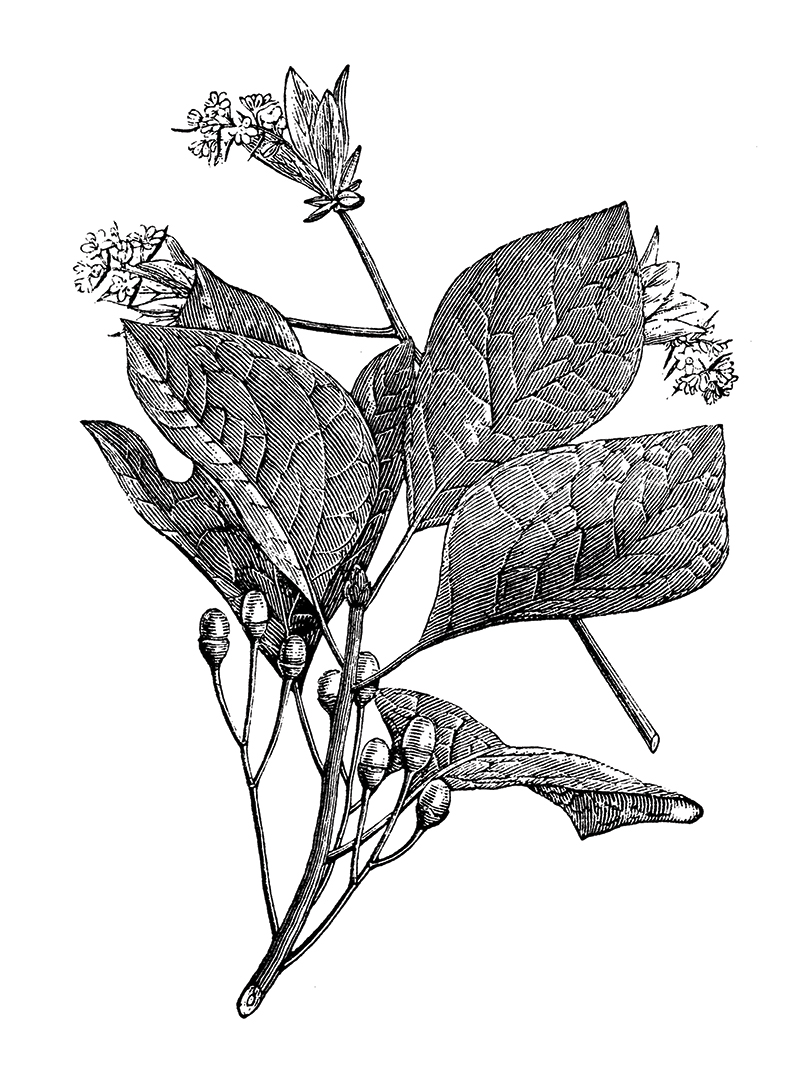 Few wild edibles on the brunch menu at Eggshell Bistro in Carmel, Indiana, provide the beauty and versatility of milkweed, says Chef Larry Hanes. Prized by Native Americans, milkweed flowers bloom in early summer yet Hanes prefers wetting unblooomed milkweed and quickly flash frying it in hot oil with garlic. In addition to releasing spring-worthy aromas, the milkweed imbues dishes with a broccolini-like flavor. Think rapini without the bitterness.

INSIDER TIP: Although milkweed grows wild, Hanes cultivates it in his garden so he can apply it to his flower centerpieces. Seeing displayed wild greens help waiters sell cautious diners on trying wild greens. 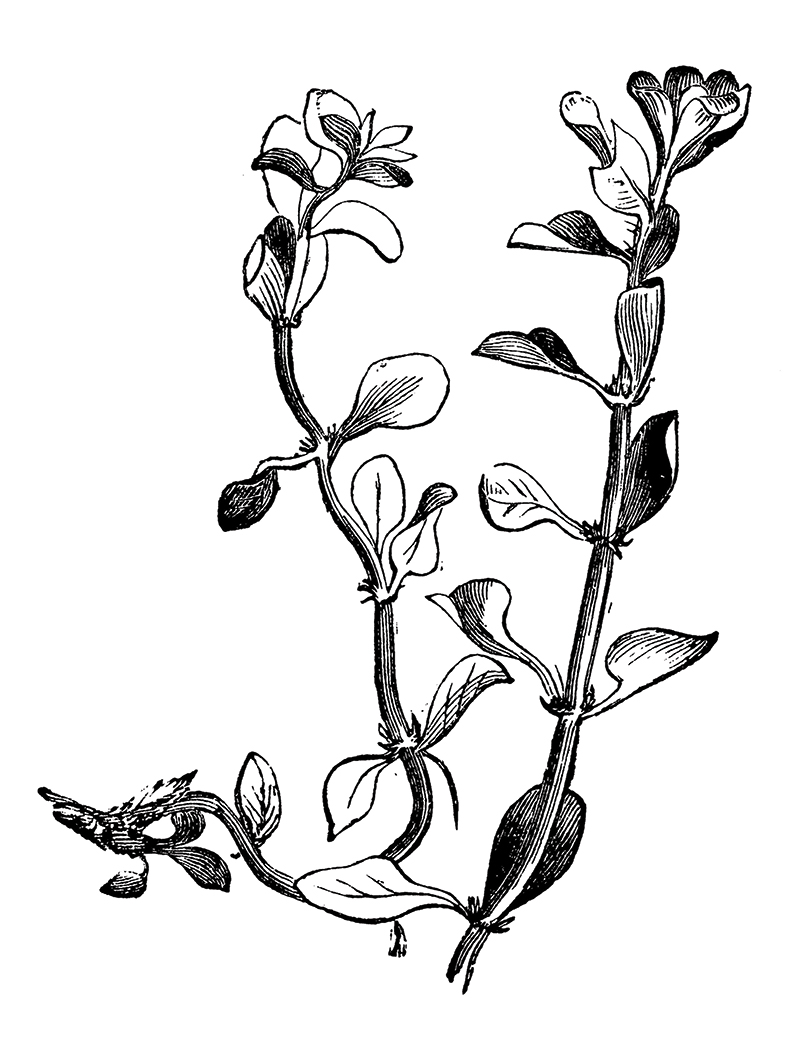 Purslane, a thick-leafed staple of Middle Eastern cuisine, thrives in hot and sunny conditions, which is why it overruns Southern California. For years, Nathan Pietso, a second-generation farmer who operates Farmhouse restaurant in Los Angeles, tried to obliterate it until he was served a purslane salad in Lebanon. It awakened him to the weed’s captivatingly briny flavor and unique texture: a delicately snappy structure that can yield an okra-like slipperiness.

BEST PREP: Although purslane can be sautéed or grilled as a side, Pietso likes it raw. He dresses his purslane and avocado salad with olive oil and moats it with a feta cheese dressing. “In a bowl, purslane looks unique, almost like landscaping,” he says. “It also forks well, which is why it works so well in a salad.”

INSIDER TIP: Since purslane is a nuisance for farmers, it’s often inexpensive at farmer’s markets. But avoid thick-stemmed leaves. As they turn red, they become overtly gooey. On the flipside, try highlighting purslane’s high levels of vitamin C and folic acid to appeal to health-conscious diners and using the term “volunteer greens” to draw extra attention.

WHERE THE WILD THINGS ARE

For a kitchen that’s up for a makeover, quit the kale, cut the cauliflower and back away from the Brussels sprouts. Add some of these wild greens to your repertoire instead. 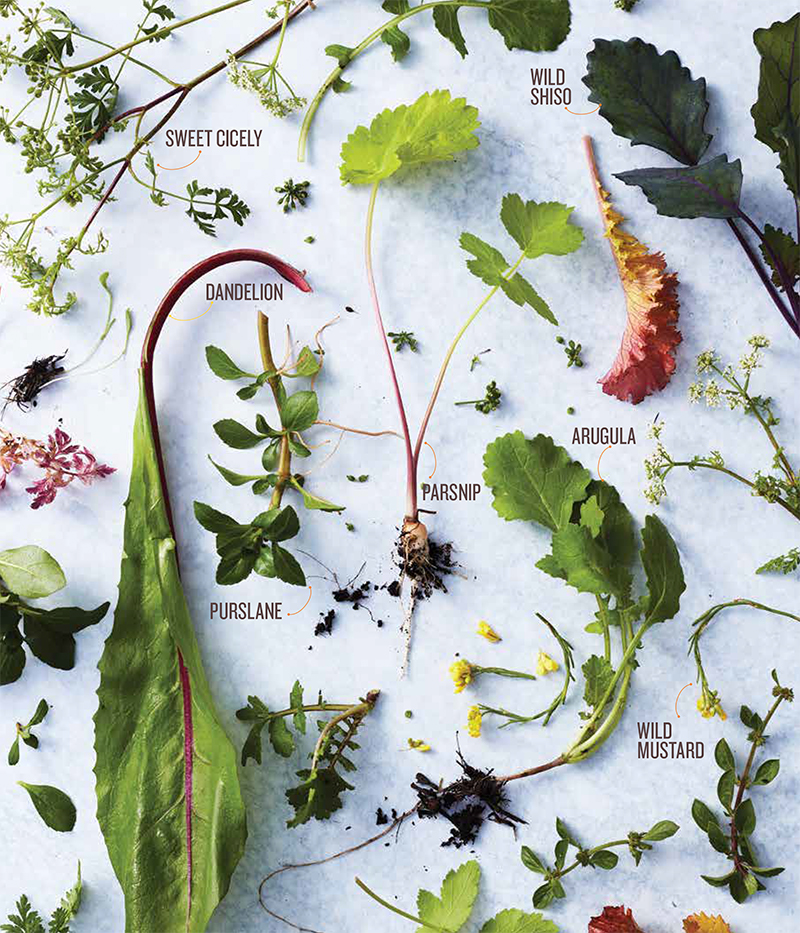 Also called perilla, the minty brightly flavored leaves with hints of cinnamon and clove, are friends of desserts, fruity drinks, tea and fermented beverages, including kombucha.

Similar to angelica, but in the raw, gives off a licorice root flavor that is an ideal additive in cocktails.

Reminiscent of sorrel or pea shoots, these mild greens have a distinctive field pea flavor, but their soft stem works as a garnish or salad topper.

This succulent, found in salty areas by the ocean, can add crispness and lilts of salinity. Works especially well as the base of versatile verde sauce.

Add these greens, which hover between horseradish and wasabi on the spice scale, to a wok for a peppery stir fry or as a garnish for nigiri.