Sponsored by 1850 For the Folger Coffee Co.

A new generation of coffee cocktails is percolating greater interest at bars and coffee shops. Some are experimenting with bottled cold brews and using hot espresso to upgrade espresso martinis while roasters are partnering with distillers to create coffee spirits, including a coffee vodka from Central Standard in Milwaukee and a coffee amaro pazzo made by Long Road Distillers and Madcap Coffee in Grand Rapids, Michigan.

Then there’s the experimental crowd – including The Aviary in Chicago and Kobrick Coffee Co. in New York – which are using siphon coffee brewers to infuse hot cocktails or an AeroPress to slip a shot of caffeine into classic old fashioneds.

The result is a lineup of coffee drinks that rivals classic cocktails, as opposed to the sugary booze bombs of the past. “Tasting through your coffees and thinking of what flavors you want to accentuate or highlight is a great way to start creating a cocktail,” says Amanda Whitt, a New York–based coffee and cocktail consultant.

Contrary to conventional wisdom, coffee-based cocktails are not more expensive or time-consuming to produce than traditional cocktails, as liquor still tends to be far more expensive than coffee.

Cold brew concentrates, which can be refrigerated for up to a week, have a longer shelf life than hot coffee that’s been chilled. Plus, coffee cocktails allow restaurants to open earlier and coffee shops to stay open later, thus offsetting rising urban rent costs. Whitt reports that coffee cocktails often up ticket totals. “They are typically a drink someone orders who will ‘hang’ and have one to three drinks,” she says, “rather than a simple grab-and-go order.” 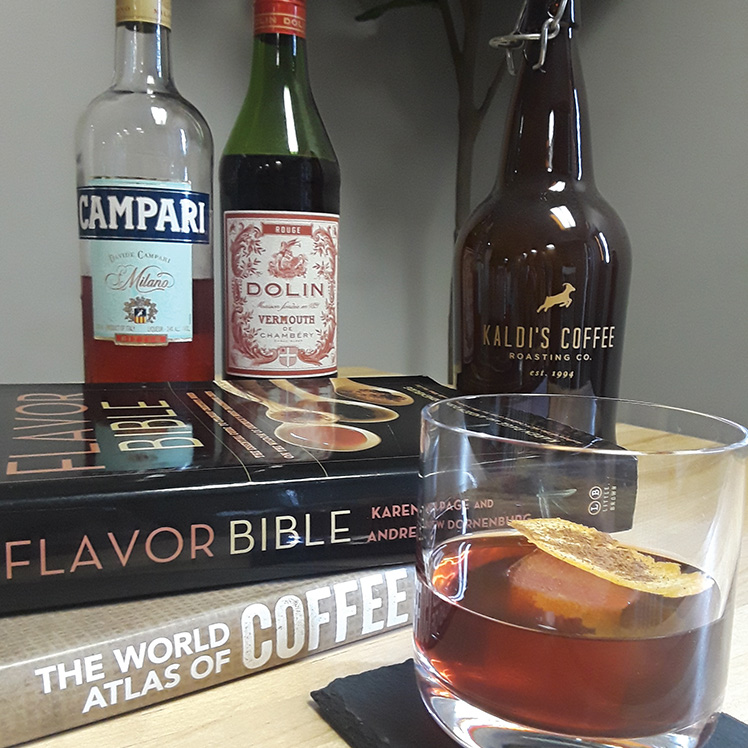 Combine liquids in a glass over a single ice cube. Garnish with orange peel and a sprinkle of cinnamon. Makes 1 serving.

Ration and Dram, an innovative craft cocktail bar in Atlanta, makes its own nitrogen-infused coffee, which it pours cold from a keg. The result is creamy and cascading, like a Guinness, but with an aggressive jolt rather than a lulling affect. For the Speedy Gonzalez, Ration and Dram’s inspired brunch pick-me-up, Mixologist/Partner Andy Minchow tops a mix of Vida mezcal, fernet and agave nectar with three ounces of the house nitro coffee to produce a rich cocktail that balances sweet, bitter and smoky. “It’s a punch-you-in-the- face-and-wake-you-up kind of cocktail,” says Minchow, who also calls it a “one-and-done” drink. “I had one guy order two – and that was that.”

Coffee-spiked negronis are particularly hot at the moment because the bitterness of Campari and coffee meld seamlessly. Plus, bartenders can use any kind of coffee to keep costs down. The acidic nature of washed coffees, so named because the outer layer of each bean is removed before they’re washed with water, complement the citrus flavors from the Campari; light-roasted coffees add slightly fruity and chocolate notes on the finish and dark roasts add strong chocolate notes on the end.

“The negroni is a stirred drink that can be served over ice or straight up,” says Matt Foster, a barista at Kaldi’s Coffee Roasting Co., which has several cafés in St. Louis and the surrounding area. “Even if you use a coffee that’s not concentrated, it won’t dilute the cocktail any more than an ice cube would.” Foster, who recently won the first U.S. Coffee in Good Spirits competition, does his spiced cold brew negroni simply with a single ice cube, an orange peel garnish and a sprinkle of cinnamon to offset the bitter tones.

The Garden Table, a restaurant-juicer in Indianapolis, works with local purveyors to strengthen its cocktail program. To entice skeptical sippers, beverage director Raymond Martin created a Banana Bluth, a drink inspired by the TV show “Arrested Development.” He envisioned a chocolate-banana rum cocktail, but while building it, he subbed out chocolate for an Indy-based Tinker Coffee nitro cold brew and found the crisp berry aftertaste dovetailed perfectly with all-natural Bumbu rum and crème de banana. But something was still missing. “Then the Almond Bite (a local vegan, dairy-free liqueur) rep came by,” says Martin. “and it was the missing piece to the puzzle.”

Beatrix, an all-day spot in Chicago, takes advantage of the versatility of coffee cocktails by offering untraditional espresso old fashioneds at all three meals. The drink bridges Beatrix’s dedicated coffee bar and its ambitious bar program: at brunch, customers sip them over eggs; at dinner, people pound them like any other cocktail. Beatrix mixes its espresso with syrup, which enables it to hold its flavor – and hold its own with molasses-tinged Buffalo Trace bourbon, spiced Cruzan® Black Strap Rum and chocolate bitters. “Barrel-aged spirits can have notes of coffee and cocoa,” says John Economos, a partner. “This cocktail highlights those flavors more, and the inclusion of Black Strap Rum gives the drink a burnt sugar-pancake type flavor.”